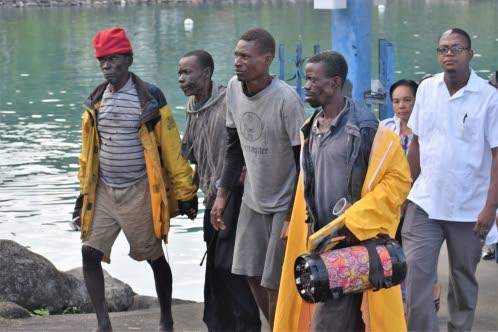 KINGSTON, Jamaica – The four Haitian fishermen who were rescued in Portland waters in late November are now safely back in their country, after a confusing expedition.

According to the Jamaica Observer, The men were rescued at St Margaret’s Bay in the vicinity of the Rio Grande bridge in Portland on November 27, after their disabled vessel was spotted by Jamaican fisherfolk who assisted them to shore.

They were subsequently handed over to the Portland police and then processed by the health department and immigration representatives.

Head of the Portland police Superintendent Duane Wellington told the Jamaica Observer that the men, when they appeared before the Portland Parish Court on December 6, had the charges of illegal entry against them withdrawn and they were handed over to authorities from the Passport Immigration and Citizenship Agency (PICA) in Kingston, based on new information.

PICA head Andrew Wynter said information from the men’s homeland significantly impacted their status and saved them from being sent back to Haiti as deportees.

Initially, authorities had charged the men with illegal entry and had intended to deport them following the court proceedings.

“Because they were considered rescued at sea, you wouldn’t deport those persons. It wouldn’t be considered a deportation under the circumstances,” Wynter explained.

“It wasn’t an illegal entry into the country. What happened is they were fishing, and apparently their boat got into mechanical difficulties and they drifted for a few days and ended up in Jamaican waters. Our coast guard had actually got a request from the Haitian coast guard to assist with search and rescue, so when they were initially taken into custody we didn’t have that information; but after we got it, their status changed because we saw that it was a genuine case of persons in dire need,” the PICA head explained further.

The men, natives of Jérémie (a town in south-west Haiti), through an interpreter, told rescuers that they had been at sea for 16 days drifting aimlessly after developing engine problems and running out of fuel.

Their small vessel carrying rotting fish and fishing gear, drifted into the waters of St Margaret’s Bay, Portland, where they were found.