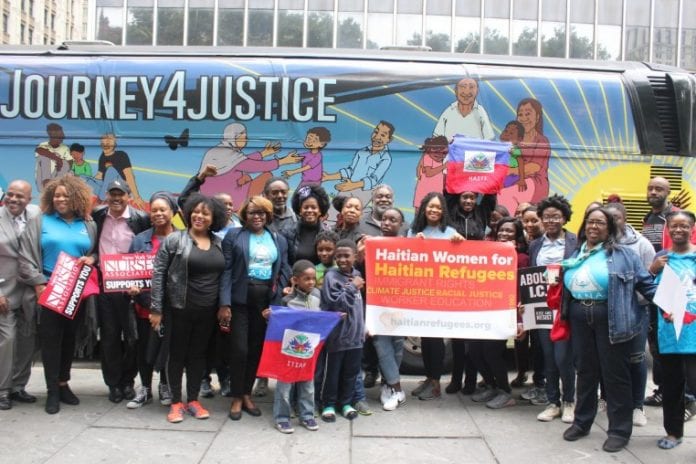 The Brooklyn-based Haitian Women for Haitian Refugees’ Temporary Protected Status (TPS) Committee told the Caribbean Media Corporation (CMC) that it is collaborating with the Haitian National TPS Alliance in holding Biden to his promise of reversing Trump’s immigration policies.

“Joe Biden and Kamala Harris campaigned on a promise that, in the first 100 days of the Biden-Harris administration, they would reverse Trump’s discriminatory policies on immigration, including protecting TPS holders and DACA (Deferred Action for Childhood Arrivals) recipients, ending family separation and restoring asylum laws,” Ninaj Raoul, chair of the Haitian Women for Haitian Refugees, told CMC.

“Now, we will go to Washington to fight for a permanent solution – permanent residency for all 400,000 TPS holders,” she added.

“In January 2021, we are going to pressure the White House to demand that if they truly reject racism and the nationalist acts of the past administration, they must favour our community and approve a permanent residency now.

“We will continue to fight to approve permanent residency for more than 400,000 TPS recipients within the first 100 days of the next administration,” Raoul continued. “Once we do, we don’t expect to go home.

“We will remove the fragments of damage left behind by this (Trump’s) administration. We must keep fighting until this country recognizes the humanity of all immigrants,” she said.

In response, several lawsuits have been filed in US district courts.

“The basis of most of the lawsuits is that the decisions to end TPS was rooted in racial discrimination, violating required Immigration and Nationality Act (INA) and Administrative Procedures Act (APA) procedures, and infringed on the constitutional rights of TPS beneficiaries,” Raoul said.

She said that one lawsuit, Saget v. Trump, filed in the US District Court for the Eastern District of New York in Brooklyn, challenges the Trump administration’s decision to terminate TPS for Haitians.

Raoul said that the US National Association for the Advancement of Coloured People (NAACP), the country’s largest and oldest civil rights organization, also filed a lawsuit against the US Department of Homeland Security (DHS) on behalf of Haitian TPS holders.

In addition, Raoul said members of the National TPS Alliance have “organized around” Ramos et al v. Nielsen, a class-action lawsuit filed by nine TPS recipients and five US citizen children of TPS holders against the DHS in the US District Court in the Northern District of California.

“TPS holders have been able to stay in status after Trump terminated TPS because of these class action litigation efforts,” Raoul said.

“Meanwhile, the National TPS Alliance and all the participating organizations, and its committees and member organizations, including Haitian Women for Haitian Refugees, work collectively to self-advocate for a permanent solution, permanent residency for all TPS holders.”

Raoul said the National TPS Alliance’s “On the Road to Justice” journey continues to make stops until its final destination in Washington at Black Lives Matter Plaza, near the White House.

After a rally in Brooklyn, she said Alliance members and Haitian Women for Haitian Refugees “took the colourful bus” to US Senate Democratic minority leader Chuck Schumer’s residence in Park Slope, Brooklyn “to assure that their voices were heard.

“They know that if the Democrats win the election for US Senate in Georgia, Chuck Schumer may become Senate majority leader and will play an important role in their fight for permanent residency,” Raoul said.

“This group is in the fight for justice for immigrants in the long haul, and will continue to work for all immigrants.”