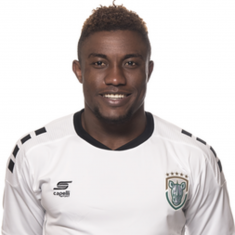 The transfer is subject to league and federation approval.

“We’re excited to include François in the group for next season,” said Fury FC General Manager Julian de Guzman.

“He has great qualities we’ve been searching for in a winger. He can score, he can create and his ability to take players on is among the best you’ll find in the USL Championship. This is exactly what we’re looking for in a difference maker for this club.”

Twenty-five-year-old François spent the 2018 season with the Hounds where he recorded four goals and five assists in 32 appearances to help the club reach a top-three finish in the Eastern Conference.

The attacking midfielder led the Hounds with 59 key passes, tied for 14th in the USL Championship overall and recorded more than 2,600 minutes of action across the regular season and postseason, good for fourth on the side.

He said he is looking forward to joining the Ottawa Fury FC Family.

“I chose Ottawa because of the environment it provides, and I’ve always had love for Canada! I know I can fit in the system, the way the team plays, and I hope to take the team to the playoffs this season and hopefully win a championship – that’s my goal.”

Before joining Riverhounds SC, Francois played for the Rochester Rhinos in 2017 where he led the team with six assists despite only playing 10 games due to injury.

He also added a goal and started both the Rhinos’ 2017 contests in the USL Cup Playoffs.

François turned professional in 2014 when D.C. United selected him via waiver draft.

He was loaned to the Richmond Kickers where he scored one goal in 10 appearances.

Prior to joining the professional ranks he played at the University of Maryland from 2012 to 2013.

The then freshman played in all 24 games and totalled five goals and four assists on 35 shots.

He redshirted his sophomore campaign before leaving Maryland for the waiver draft.

At the time François also had short stints for the Central Jersey Spartans and Baltimore Bohemians, both of USL League Two.