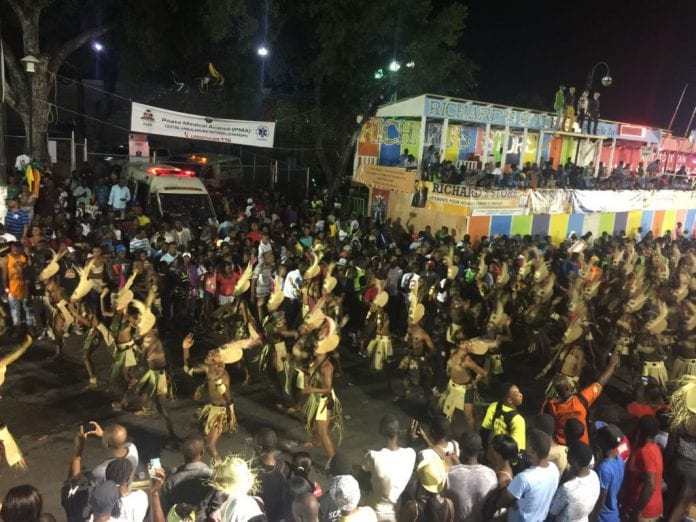 PORT-AU-PRINCE, Haiti – For the second year in a row, Haiti’s pre-Lenten Carnival celebration has been cancelled as the country’s two armed forces: the Haiti National Police (PNH) and the Army, squared off in a gun battle over the weekend.

The gun battle between the police, civilians dressed in regular clothing, and members of the newly revived Armed Forces of Haiti ensued shortly after 1 p.m. on the Champ de Mars, the staging ground for Carnival festivities.

By 8 p.m. the government announced that its national Carnival, planned for Sunday through Tuesday (February 25), was officially cancelled “in order to avoid the planned bloodshed.” At least one person was killed in the capital when he was hit in the head with a bullet, local radio Radio Mega reported. At least 13 others were also wounded, including police officers, the radio said.

According to police officers, the battle began on their side because of the government’s failure to meet their demands for a pay increase. The clashes also involved persons demanding the resignation of President Jovenel Moise and members of the Haitian Armed Forces.

In a statement, the government said that it was condemning “these acts of violence and acts which violate freedom and democracy”.

It questioned the rationale behind the attacks aimed at driving the country into chaos, despite the commitments and decisions of the authorities to respond to the demands of the police officers.

It urged people to be vigilant “in these troubled moments of national life” noting that “in any case, it cannot allow a trivial exploitation of the demands of the PNH and justify these violent actions which expose the country as much, through an alleged rejection of carnival by a certain sector of the population.”

On Sunday night, acting Prime Minister Jean-Michel Lapin said the government could not immediately raise officers’ pay — which is between $200 and $255 a month before taxes — due to rules governing the salaries of public servants.

But in another report, President Jovenel Moïse announced other measures which included doubling a monthly police debit card from $51 to $102 for 15,000 members of the police force; the construction of a new police housing village with 2-bedroom apartments that would be sold with a mortgage payable over 25 to 30 years at 7.5 percent interest rate, and access to the National Old Age Insurance Office (ONA), a government pension plan reserved for private-sector employees.