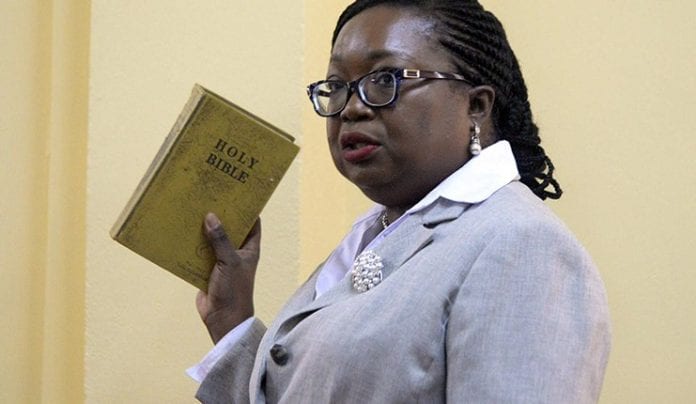 Guyana’s Deputy Chief Elections Officer, Roxanne Myers, has been arrested by police as they continue their investigation into the disputed match 2 regional and general elections.

Attorney Nigel Hughes, told reporters Tuesday that his client “has been arrested for obstructing the course of justice because she exercised her right to silence”.

Hughes said that the Deputy Chief Elections Officer learned that she was wanted by the police for questioning and so she voluntarily visited the Criminal Investigations Department (CID).

“[Ms. Myers] was informed today that the police wanted to interview her, she attended the police station with her lawyers, when we got there we had a bit of a wait and then they questioned her. She said she wanted to exercise her right to silence and they then said they’re going to keep her in custody on the basis of obstructing the course of justice,” he added.

Hughes said he is not now sure where his client is being held since she had been “sent to one of the lockups”.

In August, soon after the Guyana Elections Commission (GECOM) announced that the main opposition People’s Progressive Party/ Civic (PPP/C0 had won the elections, the police launched a “comprehensive investigation” into the elections resulting in charges being laid so far against the Chief Elections Officer Keith Lowenfield and Returning Officer of Region Four, Clairmont Mingo.

The two men have appeared in court on charges relating to fraud, misconduct in office and breach of the public’s trust,

Mingo is also before the court with former government minister, Volda Lawrence, the chairman of the People’s National Congress Reform –the largest party in the coalition –A Partnership for National Unity (APNU) –on another fraud charge.

Two other GECOM staff members are also before the courts as a result of the investigations.