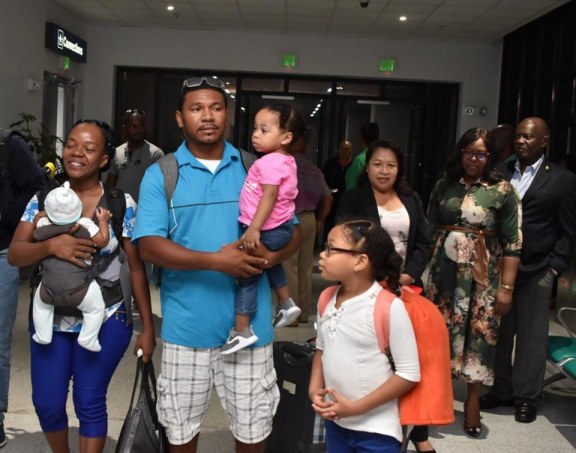 Orin Grimmond, his wife and three children were greeted at the airport by Minister of State Dawn Hastings- Williams, Minister of Citizenship,  Winston Felix, Minister of Foreign Affairs,  Dr. Karen Cummings along with Director-General of the Civil Defence Commission, Lieutenant Colonel Kester Craig.

Craig stated that following the devastating effects of Hurricane Dorian, the CDC has activated its response mechanism and are in contact with over one hundred Guyanese living in the Bahamas who were affected.

“To date, we have a group which allows us to keep in direct contact on a daily basis to identify the needs, to identify if people wish to return and through that mechanism we were able to identify the five persons that came here,” he said further disclosing that there are twenty-three other Guyanese who have indicated their interest to return to their homeland.

According to the Director-General, once travel arrangements are in place, they will be able to return to Guyana. He disclosed that the private sector has been collaborating with the government to give support to those Guyanese who have been affected by Hurricane Dorian.

Hastings-Williams also expressed her satisfaction with the response from the private sector.

This encourages us as a government to see that we can partner with the private sector, business persons, non-governmental organizations…. they have done so in the past and they continue to do it,” the State Minister noted.

Meanwhile, Minister Felix emphasised that in times of need “we do not leave Guyanese in distress outside of Guyana,” adding that “we dealt with this first family of five, and we anticipate there are others.”

Cummings said Guyana welcomes back its people with open arms.

She noted that persons returning home will stand to benefit from the rapid economic growth Guyana will be experiencing in the near future.

For the next five days, the Guyana Marriott Hotel will accommodate the Grimmond family after which they will be transported by TransGuyana Airways to their place of origin – Lethem.