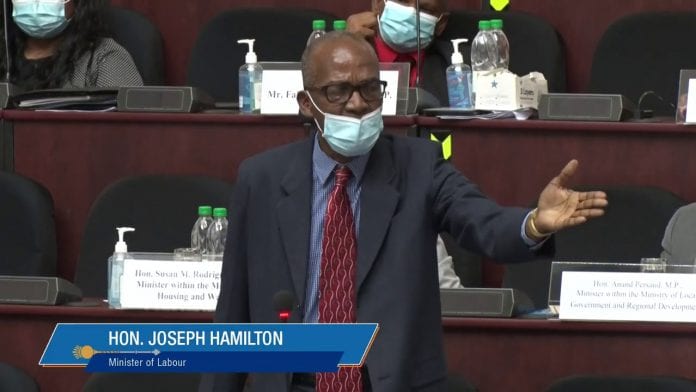 GEORGETOWN, Guyana (CMC) — Minister of Labour Joseph Hamilton says the Government remains committed to safeguarding the social wellbeing of Venezuelan migrants in the country, making sure they are protected and are paid fairly for their labour.

He was speaking at a webinar hosted via Zoom by the United Nations Development Programme (UNDP) and the International Labour Organization (ILO), to launch the first pilot project to reduce the socioeconomic vulnerabilities of Venezuelan migrants.

The meeting saw regional representatives discussing strategies to maximise contributions to the economies of recipient countries, and to foster unity. One objective of the new strategy is to turn migration into a factor for sustainable development.

“The Government of Guyana plans to lay before the ILO and the UNDP a holistic programme, because many of the Ministries will have to participate in the development of the project, beginning with the Ministry of Home Affairs who will have to deal with the issue of them being in the country legally and allowing for work permits,” Hamilton said.

He said there are three categories of people coming from Venezuela – Guyanese who are returning home after decades living abroad, children who were born to Guyanese parents, and Venezuelans.

Going forward, the minister noted that the three categories of migrants would be monitored closely to ascertain their specific needs, since their demands are different.

“As Guyanese, we see it as an obligation, because every Guyanese has a relative living in some country as a migrant; and, therefore, we understand the importance of opening the doors, the importance of ensuring that migrants feel comfortable and safe, and they can develop a life for themselves and families in Guyana, like Guyanese have done throughout the world.”

Hamilton said the Government wants all migrants to be treated equally by their employers, stressing that they must enjoy the same health benefits as others at worksites.

“We at the Ministry of Labour recognise the influx of migrants. We have started a programme where all our labour officers and our occupation safety and health officers have to study foreign language, so that they can properly interact with the migrant and must be able to speak their language well. They have started Spanish,” he said.

Further, the Minister referenced the Ministry of Human Services and Social Security’s Garment and Accessories Cottage Industry Initiative, which aims to provide entrepreneurial opportunities for the female migrants.

Hamilton added that his Ministry is willing to partner with the ILO and UNDP to offer training to the migrants through the Board of Industrial Training, which, he noted, is the premier institute for technical and vocational training in Guyana.