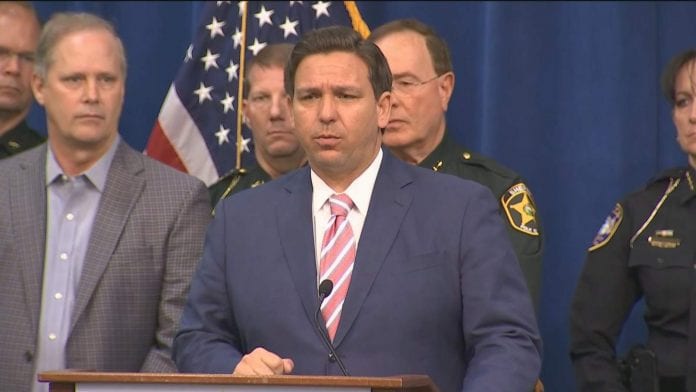 Months after the death of George Floyd, which sparked a series of Black Lives Matter protests around the world, Florida Gov. Ron DeSantis is proposing harsher penalties for violent protesters and looters.

DeSantis made his announcement on Monday backed by law enforcement and legislative leaders. At a press conference, he said the state is going to get tough on anyone who participates in disorderly protests that cause property damage or injury. He also said that he will always stand with the police who are employed to keep the communities safe.

Today I announced bold legislation that creates new criminal offenses and increases penalties for those who target law enforcement and participate in violent or disorderly assemblies. We will always stand with our men and women in uniform who keep our communities safe. pic.twitter.com/ITl5GmmrZJ

The bill, which state lawmakers will consider during next year’s legislative session, will push felony charges against violent protesters, including against those who block roadways. The proposal will also cut state funding to cities that “defund the police.”

“I look at what goes on in Portland. They’ll have people, they’ll arrest them,” Governor Ron DeSantis said during Monday’s press conference. “They’re all scraggly-looking ANTIFA-types. They get their mugshot taken, then they get released. It’s like a carousel; on and on it goes.”

“That’s not going to happen in here in Florida,” he added.

The proposal also includes a ban on violent or disorderly assembling where property damage or injuries to other people occur. A violation can lead to a third-degree felony. People from out of state would also face enhanced penalties for participating.

A provision in the bill would go after local governments who appear to be focusing on cuts to police departments, and in turn will cut state funding to those municipalities. However, DeSantis said if it appears to be a normal budget cut, then the local government won’t lose state funding.

Blocking streets, or obstructing traffic during an unpermitted protest would become a third-degree felony under the bill. Drivers would not be liable for injury or death if they are fleeing for safety, the governor explained.

Following the announcement, the governor received massive backlash from legislative organizations who described his proposal as an “anti-protest” bill.

Micah Kubic, the executive director of the American Civil Liberties Union (ACLU) of Florida, responded to the proposal stating that: “Gov. DeSantis’ proposal is undemocratic and hostile to Americans’ shared values. This effort has one goal: silence, criminalize, and penalize Floridians who want to see justice for Black lives lost to racialized violence and brutality at the hands of law enforcement.”

Kubic stated that the American Constitution “firmly protects protests even when – and especially when – they challenge government policy, and express dissatisfaction with the status quo.”

He said that DeSantis wants to “use his power to throw more people into the criminal legal system by enacting overly harsh criminal penalties for protesters who are exercising their constitutional right to take to the streets and demand justice,” instead of addressing issues surrounding police brutality in the state.

The African American Policy Forum also stated that in his proposal, “Gov. DeSantis sending as loud a signal as possible that he is okay with, and would even encourage, anyone who wants to use their car or truck to mow down BLM protesters.”

The organization also added that: “In the first month of protests after George Floyd’s death, drivers hit protesters 66 times. Today, Florida Governor DeSantis proposed removing any liability from drivers who cause injury or death by hitting or driving into protesters. His message couldn’t be clearer.”

In a response to the killing of George Floyd and worldwide protests, police departments in areas of Florida have been coming up with new ways to increase accountability and transparency.