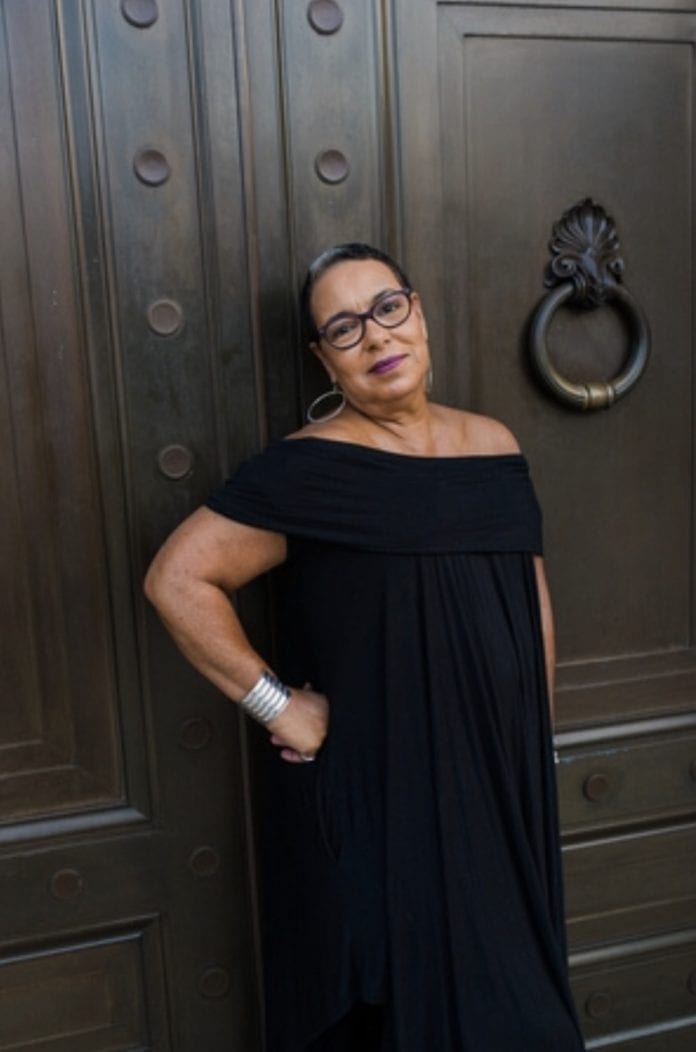 It’s always heartbreaking to hear of yet another community member battling cancer.

That’s how I felt a couple weeks ago when reading a social media post by one of Jamaica’s leading women in music and entertainment, Solid Agency’s Sharon Burke, who shared details of her longtime friend’s fight with the disease.

“Our dear friend Gina was recently diagnosed with stage four lung cancer, which has metastasized to the brain and adrenal glands. She is a fighter who is now facing a battle with cancer for the second time, having previously been diagnosed with the dreaded disease in 2009 and did a double mastectomy. She beat it then and we are very, very confident and positive with all the love that surrounds her, and the good vibes and financial help, she will beat this new diagnosis again,” Burke posted.

She then asked readers to offer support by donating to her Go Fund Me page.

Gina Jarrett Alder, 62, has lived in South Florida for around 16 years, and currently resides in Weston.

She shared her journey with CNW.

“In 2009, I was diagnosed with Stage 1 breast cancer. It was early, the tumor was small. We discovered that even though it was in an early stage, the cancer was aggressive. I decided to do a double mastectomy – I didn’t want to hold on to any part of it. I didn’t do any chemo, I didn’t do any radiation, but I was on a chemo type of drug for just about six years. It had horrible side effects. It made my joints hurt. It made me gain weight. It affected my eyesight, and tons of other things. But at the time, that was what was required, and that’s what I did,” Jarrett Alder said.

By 2010, Jarrett Alder began healing, which she says was painful within itself. However, once healed, she decided to dedicate herself to giving back. She first sent an email to everyone she knew, urging all women to get screened for breast cancer.

She recalls receiving a flood of responses.

“It was people who were deathly afraid of what was happening to them; people who thought they had cancer, so they’re gonna die. And I was able to alleviate some of their fears. I showed them my breasts, I showed them what they had to look forward to. I allowed them to feel them,” she said.

“I have spent the past several years just doing one-on-ones with people. I also go to doctor’s appointments with women. You find that you go to the doctor, you’re given a lap full of information, and you come out of the doctor’s appointment and someone says to you, ‘What has the doctor said?’, and you’re like, ‘I don’t know’. It’s just so very overwhelming.”

Jarrett Alder explained that she follows people, who often begin as strangers and end up being friends, to chemo appointments, takes notes for them during doctor’s visits, spends hours with them on the phone, and basically, as she says, provides hope in an otherwise terrifying experience.

However, in the last few months Jarrett Alder has found herself back on the cancer rollercoaster.

“I started experiencing headaches, backaches, and more recently some amount of fatigue. I found excuses for all the little ailments I was going through, until about a month ago I had a really bad headache and the back pains were really bad,” Jarrett Alder shared.

Doctors did an MRI, and diagnosed her with Stage 4 lung cancer, which had metastasized to the brain. Lesions were found on her brain, lungs and adrenal glands.

Jarrett Alder, who is now getting what she calls impeccable treatment at Memorial West Hospital in Pembroke Pines, the best treatment she’s ever had, she says, has so far done four rounds of radiation, and is awaiting a treatment plan for her lungs.

However, her positive outlook and steadfast commitment to helping others is unwavering, even in the face of her own adversity.

“In the meantime, I’m going through a rigorous diet change, I’m on a lot of medication, I’m meditating, I’m changing the way I think, and the way I feel. Overall it’s an interesting journey. I see it as something positive. I give thanks. I am positive. I am focused, and I’m anxious to move ahead. I am blessed,” she told CNW. 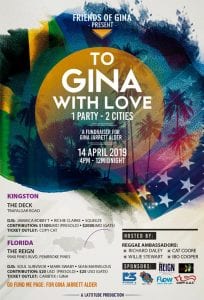 Jarrett Alder, who was once married to the late Irvin “Carrot” Jarrett of leading Jamaican band, Third World, has two children with the musician –  Rain and Sky. The children, her husband, and Rain’s 5-year-old daughter Noa-Lee, have been Jarrett Alder’s constant rock. The community at large has also showered her with tremendous, awe-inspiring support from friends, family, and strangers all over the world.

To help close the gap on the funds needed for treatment, Jarrett Alder’s loved ones are hosting a two-city fundraising party for her on Sunday, April 14. Two events will be held simultaneously that night – one at The Deck in Kingston, and the other at The Reign in Pembroke Pines. Members of the Third World band, who are much like family to Jarrett Alder, will be attending the Florida event.

Those who want to lend a hand of support are asked to donate financial contributions through the Gina Jarrett Alder Go Fund Me page, and attend one of her upcoming events in Jamaica or South Florida.