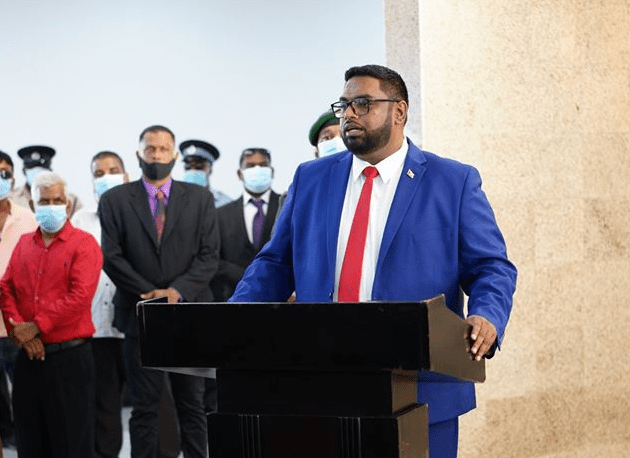 Ali, 40, was slapped with several charges related to conspiracy to defraud the Guyana government of more than GUY$170 million (One Guyana dollar=US$0.004 cents) in the sale of the several parcels of land.

The matter was previously called before the Chief Magistrate at the Georgetown Magistrates’ Court on August 6, where Ali’s attorney Devindra Kissoon made an application for the charges to be dismissed on the basis that the president is immune from suit as per Article 182 of the Constitution.

The Chief Magistrate had previously adjourned the matter to October 26, , but Kissoon wrote again to various parties including the Director of Public Prosecutions (DPP), renewing his application that the charges be dismissed since Article 182(2) of the Constitution mandates that no criminal proceedings shall be continued against a sitting President in respect of any done by him in his private capacity.

Kissoon has also argued in his letter that it was not in the public interest to prosecute a sitting President and to do so would violate the prosecutors code of conduct adopted in 2018.

Ali, through his attorney, has always maintained that not only do the 19 charges levelled against him not amount to an offence known to law, but even if proven, could not lead to a conviction.

On Friday, when the matter was called, the prosecutor Patrice Henry, in response to Kissoon’s communication, advised the Court that the Special Organised Crime Unit (SOCU) had taken a decision that it was not in the public interest to prosecute a sitting President and to so do would violate Article 182(2) of the constitution.

The Chief Magistrate ultimately ruled in Ali’s favour wholly discontinuing all charges against him.

Speaking after the ruling, President Ali said that he was very grateful to his attorney Kissoon who stood by his side from the time investigations commenced to the proceedings in the Magistrate’s Court.

Kissoon had successfully obtained successive stays of the Magistrate’s Court proceedings pending the hearing of those civil matters, giving Ali room to campaign and contest the national elections, eventually resulting in him being elected President.

The Court of Appeal was scheduled to rule on an appeal filed by him Friday, but it unclear whether those proceedings will proceed in light of the dismissal.

Ali insisted that the charges against him were “politically motivated and baseless”.