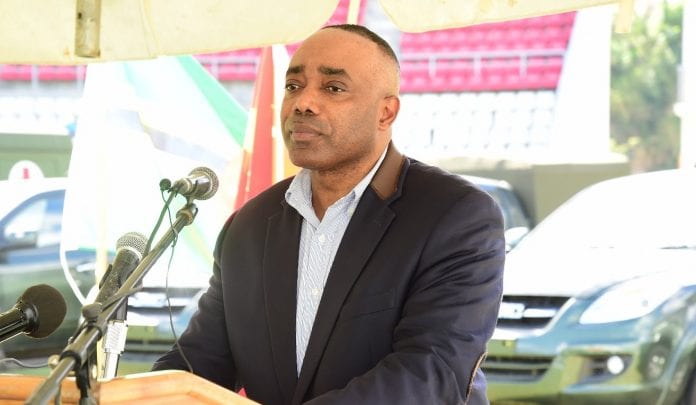 ROSEAU, Dominica – Dominica’s National Security Minister Rayburn Blackmoore says he is prepared to allow police to round-up undocumented Haitian nationals as Dominica reiterates a warning for them to stop their involvement in illegal migration to the neighboring French islands.

“We see them as our brothers and sisters, and we think it is a human thing to embrace our brothers and sisters who are seeking a better way of life. We have given a number of Haitian nationals, citizenship, permanent residency, as well as work permits so that they can live dignified lives in our beautiful country,” Blackmoore told reporters. But he said it is a “reasonable expectation for all Haitian nationals to respect the laws of this country.”

Blackmoore’s concerns follow that of Prime Minister Roosevelt Skerrit, who earlier this month said while Dominica is pleased to welcome Haitian nationals there was a minority engaged in unlawful activities including the illegal migration to the neighboring French islands of Martinique and Guadeloupe.

He said the majority of the Haitians were hard working and were making meaningful contributions to the local economy.

“As you know, we have tried to facilitate the Haitian community, they are our CARICOM brothers and sisters, we have quite a number of them here, many of them are engaged in constructive activities that are all aiding the economy of Dominica,” Skerrit said.

Blackmoore told reporters in the recent past, a number of Haitian nationals, along with Dominicans have been arrested in “some neighboring islands for illegally entering their countries by boat from Dominica.

“The government of Dominica has a fundamental duty to national and regional safety and security. Let me make it clear as the Minister responsible for National Security and Home Affairs, I am not going to stand for that nonsense and I am not ruling out having the police rounding up all undocumented Haitian nationals and have them returned to their country as soon as possible.”

Blackmoore said he was also issuing a warning to nationals who were assisting the Haitians to leave the island illegally.

“To the Dominicans, who aid and abet by illegally transporting the poor Haitian nationals, you are equally responsible, culpable under the law and you should be ashamed of yourselves. You are not only risking the lives of poor Haitian people who are seeking a better way of life, you are also compromising and risking the safety of the Dominican people,” he said.
He said he was urging the police to use “all necessary means and measures to apprehend all those responsible for this gross … illegal act.”

Police Commissioner Daniel carbon has urged the population to assist law enforcement authorities in apprehending those responsible for the illegal migration.

Despite being part of the 15-member CARICOM grouping that has established a CARICOM Single Market and Economy (CSME) allowing for the free movement of goods, skills and labor across the region, Haitians still need work permits to work legally in the region.