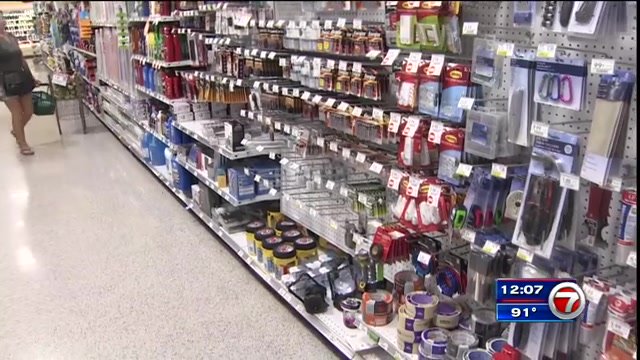 While South Florida residents rush about like crazed people to scoop up dwindling water, food and other supplies on store shelves, distributors say they are working overtime to make sure supplies are stocked out on retail shelves in preparation for Hurricane Irma.

Water is always in stock at the Publix distribution center in Deerfield Beach where production lines were in overdrive.

The distribution center supplies stores from North Broward to the Florida Keys.

Bottles, cans, and jugs are filled 24 hours a day by workers on 12-hour shifts looking to meet the demand, along with bags of ice.

Once filled, the water is shipped out to stores just five minutes later.

But on Tuesday morning at Wellington in Palm Beach County the water shelves at two Publix stores and a Wal Mart were empty, leaving a worried shopper frustrated.

Paul Reynolds looked uneasy as he pushed an empty trolley out of the Wal Mart outlet at State Road 7 and Belvedere Road.

“I went to three stores already and all the water is gone. The hurricane is scheduled to hit Florida by the weekend and all the water of done already? Not a good look,” Reynolds who said his parents hail from the Bahamas said.

Water supply to be replenished

But his fears were allayed somewhat when a charming female employee overheard his concern and assured him that the shelves would be stocked with water by early afternoon.

“Not to worry sir, we will be fully stocked in a few hours. The water is going fast,” the woman said with a smile.

The store had also run out of battery powered lanterns and candles, batteries and other supplies like bread and baked products were moving fast.

With images of the devastation caused by Hurricane Harvey in Texas last week, most South Florida residents were not gambling with their fate. Hurricane Irma is even more powerful than Harvey with maximum sustained winds of 185 miles per hour, the weather system is on a projected path to hit Florida and many were fearing the worst.

“I experienced Andrew and I can tell you that this seems more powerful. Florida had better be prepared for the worst if it hits us directly,” a woman who gave her name as Leannie said.

Florida Governor Rick Scott has already declared a state of emergency in the state.