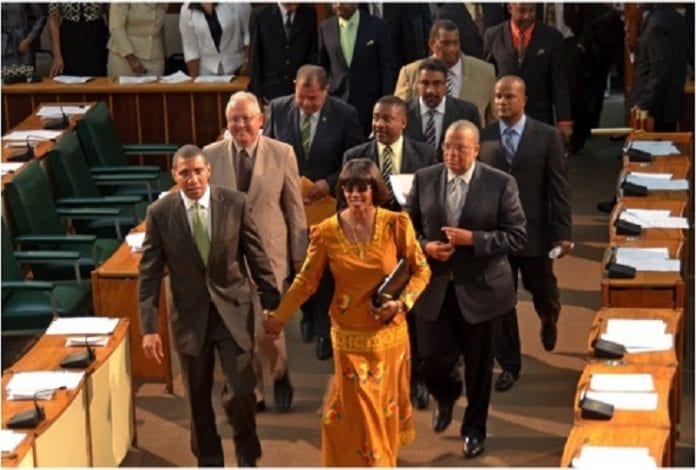 The curtains closed on yet another era in Jamaica’s rich political history when Portia Simpson Miller, a former Prime Minister and former President of the opposition People’s National Party (PNP) took her final  bow and exited the building after being lauded by Parliamentarians on both sides of the house on Tuesday.

During the special joint sitting of Parliament on Tuesday Simpson-Miller, who was first elected in 1976, said her journey was by no means easy but she is proud of her record, particularly in her constituency of St. Andrew South Western.

“I inherited a constituency with poor and inadequate housing, poor or no public infrastructure, poor health-care facilities, and limited access to special services,” she said, adding that the election of 1976 saw her “thrown into the deep enduring a period of extreme political violence”.

She told colleagues that despite widespread criticism  and the challenges, she fulfilled her mission.

“In the early days, some said I could not read…. Is it not ironic, that now they say I read too much. While some judged me harshly I was determined to be who I wanted to be, not how others saw me. I speak of my harsh experiences, not with malice – that when the slings and arrows come at you, bind up your wounds, and focus on your dreams.”

Prime minister Andrew Holness, in leading the tributes, pledged to ensure that Simpson Miller’s work as a champion of the poor, will continue to live on.

“She is a metaphor of hope and faith . In her political carrier she has been placed against powerful personalities and has never been intimidated by a challenge. I am saying to you on your retirement, that there is a new defender of the poor people of Jamaica.”

Simpson Miller, Jamaica’s first female Prime Minister and one of four Caribbean leaders, recalled her journey from the rural community of Wood Hall to Jamaica House.

“I defied the odds…..and had a date with destiny.”

In 2006, she took the reigns of government, when the baton was passed from then Prime Minister  Percival James Patterson.

The sitting was also the final one for Dr. Omar Davies, a former Minister of Finance under the People’s National Party.

Davies, who represented the constituency of St. Andrew Southern since 1993, will, like Simpson Miller handed in his resignation on Thursday.

The special sitting was attended by former Prime mInisters P.J .Patterson and Edward Seaga as well as the Speak of the House of Assembly in the Cayman Islands McKeeva Bush.

A date for a by-election to fill the vacancies in Simpson Miller’s and Davies’ constituencies, is yet to be announced.