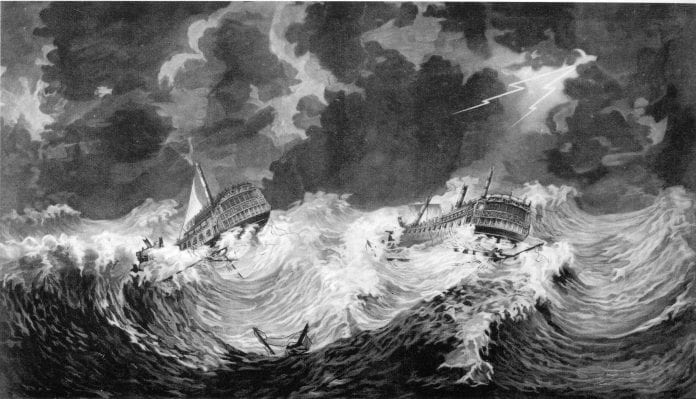 The 1780 Disaster, is the deadliest Atlantic hurricane on record. Between 20,000 and 22,000 people died throughout the Lesser Antilles when the storm passed through them from October 10–16. Specifics on the hurricane’s track and strength are unknown since the official Atlantic hurricane database only goes back to 1851.

The hurricane struck Barbados with winds possibly exceeding 320 km/h (200 mph), before moving past Martinique, Saint Lucia, and Sint Eustatius; thousands of deaths were reported on the islands. Coming in the midst of the American Revolution, the storm caused heavy losses to British and French fleets contesting for control of the area. The hurricane later passed near Puerto Rico and over the eastern portion of Hispaniola. There, it caused heavy damage near the coastlines. It ultimately turned to the northeast and was last observed on October 20 southeast of Atlantic Canada.

The death toll from the Great Hurricane alone exceeds that of many entire decades of Atlantic hurricanes. Estimates are marginally higher than for Hurricane Mitch, the second-deadliest Atlantic storm, for which figures are likely more accurate. The hurricane was part of the disastrous 1780 Atlantic hurricane season, with two other deadly storms occurring in October.