Caribbean National WeeklyWe\'ve got you covered
FeaturedThis Day In History

This Day in History: Bunny “Striker” Lee was born 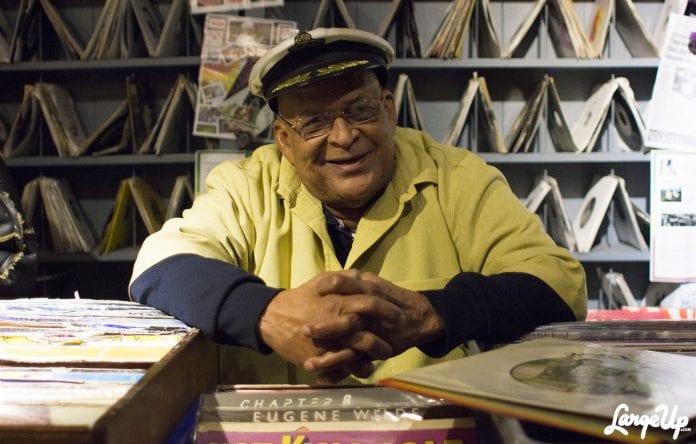 On this day, August 23, 1941, Edward O’Sullivan better known by the name Bunny “Striker” Lee, a Jamaican record producer and one of the major forces in the Jamaican music industry was born.

Bunny Lee grew up in the Greenwich Farm area of Kingston, where his father was a shoemaker Lee began his career working as a record plugger for Duke Reid’s Treasure Isle label in 1962, later performing the same duties for Leslie Kong. He then moved on to work with Ken Lack, initially in an administrative role, before taking on engineering duties. Lee then moved into producing (i.e. financing) records himself, his first hit record coming with Roy Shirley’s “Music Field” on WIRL in 1967. Lee then set up his own Lee’s label, the first release being Lloyd Jackson’s “Listen to the Beat”. He produced further hits during 1967–68 by Lester Sterling and Stranger Cole, Derrick Morgan, Slim Smith and The Uniques (“My Conversation”), Pat Kelly, and The Sensations, establishing him as one of Jamaica’s top producers. Between 1969 and 1972 he produced classic hits including Slim Smith’s “Everybody Needs Love”, Max Romeo’s “Wet Dream”, Delroy Wilson’s “Better Must Come”, Eric Donaldson’s “Cherry Oh Baby”, and John Holt’s “Stick By Me”.

Lee was a pioneer of the United Kingdom reggae market, licensing his productions to the Palmer Brothers (Pama) and Trojan Records in the early 1970s.

The mid-1970s saw Lee work with his most successful singer, Johnny Clarke, as well as Owen Gray and Cornell Campbell, and along with Lee “Scratch” Perry, he broke the dominance of Coxsone Dodd and Duke Reid. This era also saw the emergence of the “flying cymbal” sound on Lee’s productions, developed by drummer Carlton ‘Santa’ Davis, with Lee’s session band, The Aggrovators.

Lee was instrumental in producing early dub music, working with his friend and dub pioneer King Tubby in the early 1970s. Lee and Tubby were experimenting with new production techniques which Lee described as “implements of sound.” Working with equipment that today would be considered primitive and limiting, they produced tracks that consisted of mostly the rhythm parts mixed with distorted or altered versions of a song.