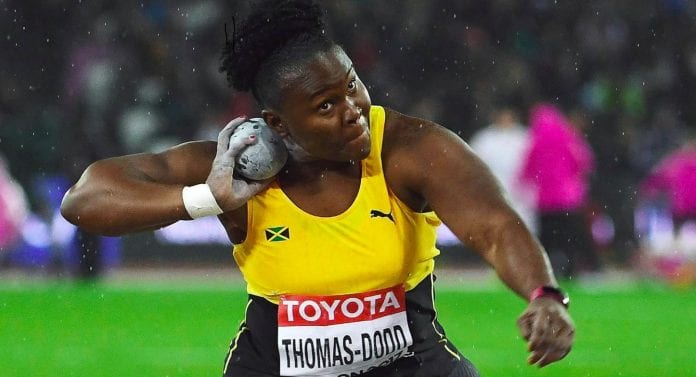 Jamaican athletes won several more medals on Friday as the 2018 Commonwealth games in Australia heads towards its closing on April 15.

Jamaica’s Danielle Thomas-Dodd followed up her World Indoor silver medal in March with a gold medal and national record in the Women’s Shot Put at the 2018 Commonwealth Games in Australia on Friday.

Dodd tossed the shot out to 19.36m, a new national record, to hold three-time champion Valrie Adams of New Zealand at bay and win her country’s sixth gold medal in track and field at the 2018 Games. She broke her own national record of 19.15m set last year.

Adams got off to a strong start opening with season-best 18.70m, 34cm better than the Jamaican’s opening throw of 18.36m but there were signs early that the Jamaican had come to compete putting in a throw of 18.70m on her second throw and then went on to take the lead with her penultimate throw of 19.36m.

Fedrick Dacres and Traves Smikle struck gold and silver respectively for Jamaica in the finals of the men’s discus throw. Dacres won with a throw of 68.20 meters while Smikle got his silver with a 63.98m throw. Behind them in third was Apostolos Parellis from Cyprus with a throw of 63.61m.

Jamaica’s Natoya Goule won the bronze medal in the women’s 800m final in a time of 1:58.82 behind South Africa’s Caster Semenya who struck gold in a time of 1:56.68 and Kenya’s Margaret Nyairera Wambui who was second in 1:58.07.

Jamaica and other Caribbean countries could earn more medals in the perennial popular sprint and quarter miles relays scheduled for Saturday, April 14.

Jamaica currently has 22 medals —six gold, eight silver and eight bronze — at the Games and is 11th on the scoreboard.