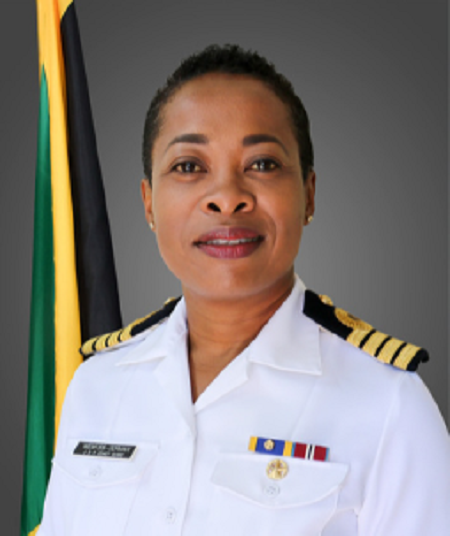 In January 2022, Wemyss Gorman will be promoted to the rank of Rear Admiral.

General Meade was a member of the Jamaica Defence Force for 38 years. In December 2016, he was named Chief of Defence Staff.

Gorman, 48, was one of three senior Jamaica Defence Force commanders interviewed for the job.

Wemyss Gorman is a career officer whose twenty-nine years of service to the JDF have been marked by noteworthy achievement and excellent service.

She has demonstrated strategic command performance in her technical area of competence as well as in other areas both inside and external to the JDF.

Wemyss Gorman graduated with honors from the University of the West Indies with a Master’s Degree in National Security and Strategic Studies.

Wemyss-Gorman, who was promoted to her present rank in December 2019, took over as Force Executive Officer in January 2020.

She presently offers strategic counsel to the Force in support of the Chief of Defence Staff’s transformative strategy.

She is also in charge of the Caribbean Military Maritime Training Centre (CMMTC) and the Maritime Air and Cyber Command, which comprises the JDF Coast Guard, JDF Air Wing, and Special Forces.

Patricia Duncan Sutherland, President of the People’s National Party (PNP) Women’s Movement, has praised Commodore Antonette Wemyss Gorman’s elevation to Chief of Defence Staff as “historic,” clearing the door for other women to be promoted within the ranks of the Jamaica Defence Force (JDF).

The appointment of Commodore Wemyss-Gorman comes as the present commander, Lieutenant General Rocky Meade, prepares to retire. She will take office in January 2022.

According to Duncan Sutherland, Wemyss Gorman’s advancement will demonstrate to females in Jamaica that “whatever job a man can perform, so can women.” Her talent has no bounds.”

“Whether in the army or the infirmary, as leader or caretaker, a woman’s place is wherever she decides it to be,” she went on.

“We thank you for your tremendous service to our great nation and look forward to your term as Chief of Defence Staff. Congratulations! We wish you continued success as you continue to encourage Jamaican women and girls,” he added.

Commodore Antonette Wemyss Gorman enrolled in the Jamaica Defence Force in 1992 and has served for 29 years.

Commodore Wemyss Gorman is the JDF’s highest-ranking naval officer and the only female officer.