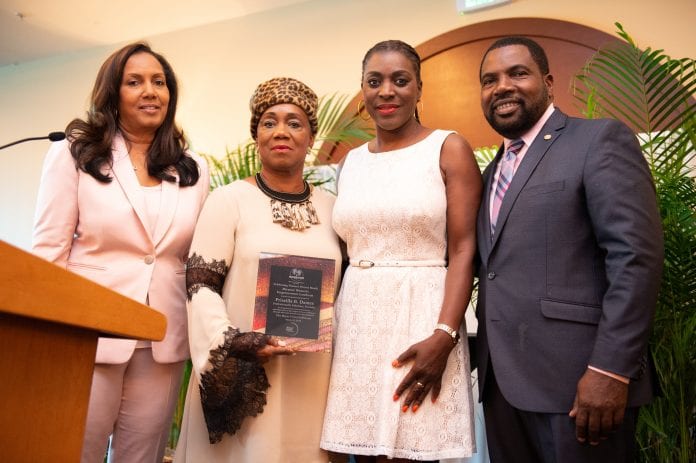 The keynote speaker, Angela Rye, is a respected CNN political commentator, attorney/principal and CEO of IMPACT Strategies, a political advocacy firm in the nation’s capital. Rye and her team are committed to encouraging young professionals in three core areas: economic empowerment, civic engagement, and political involvement.

Ms. Rye has changed the face of politics to include a gritty, urban and realistic outlook of national and international political topography and its impact on people of color. Rye shared an empowering speech reflecting on her personal and professional experiences.

Ms. Rye stated, “…if we were to remove the mask, the flaws are really what makes our story, the challenges that we’ve overcome, the experiences that we’ve had that have landed us right where we are today, that is what makes us the most beautiful, that is the beauty that God sees and yet those are the parts of our story we are most afraid to tell. I dare you to tap into all of the things that are your flat sides and your blind spots, I dare you to live in that so that you can truly live in your power.”

Priscilla Dames, Founder of Wingspan Seminars, and Burnadette Norris-Weeks, a partner in the law firm of Austin Pamies Norris Weeks, LLC, received recognition awards for their achievements and contributions as powerful business leaders in our community that constantly give back through volunteerism and mentorship.

Rebecca “Butterfly” Vaughns graced the stage to perform a powerful and uplifting poem and Maryel Epps, an acclaimed singer, songwriter and actress honored us with her songs and melodies.

Vice Mayor Colbourne stated, “The Miramar Women’s Empowerment Luncheon provided an opportunity for City leaders to meet and network with many of the women in leadership roles in our community. Having Angela Rye, a national speaker, was very inspiring.”

“Recognizing other women for their hard work and achievements in education and the empowerment of other women was especially gratifying,” Vice Mayor Colbourne added.

The vice mayor is a Jamaican descendant, born in Panama, was elected as a Commissioner in 2013 and was re-elected in 2017. She holds a master’s degree in Public Administration and has many years of experience as a public administrator