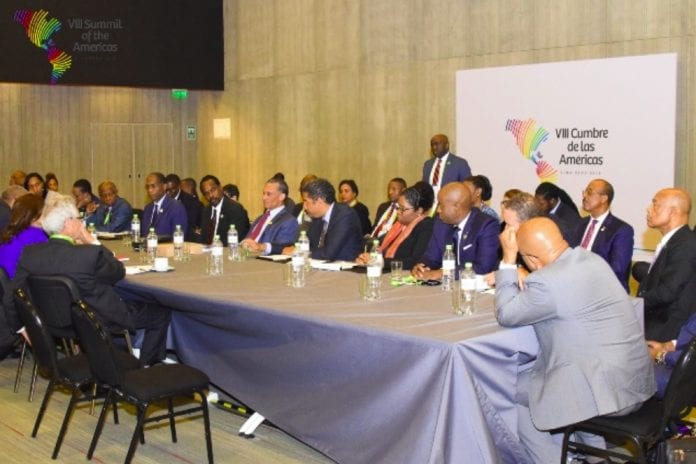 Pence made the disclosure as he met with leaders from the Caribbean Community (CARICOM), on Saturday –  the final day of the Summit of the Americas held in Lima, Peru.

According to Guyana’s Minister of Foreign Affairs, Carl Greenidge, following the Summit, the Caribbean leaders “took advantage” of the opportunity to dialogue with the US official. “It was a good opportunity to at least exchange ideas at practically the highest level in the United States,” Greenidge said.

During the meeting, the CARICOM heads of state and delegations also had discussions with other US officials including the new head of the United States Agency for International Development (USAID).

“It was a wide-ranging discussion. The Caribbean raised many of the problems they would have raised before but also looked at an on-going framework of cooperation with the US and setting a scene for the types of discussions that may arise”, Greenidge explained.

The discussions, in relation to the Guyanese concerns, were along the line of migration and crime and security. “We share, of course, some of the other things the Caribbean would normally have,” Minister Greenidge added.

These include resilience, the problem of de-risking and the disappearance of correspondent banking.

The regional leaders also raised the concerns over the rigid formulation and enforcement of rules without reference to the so called collateral damage that they may pose, especially on small island nations.

The ‘third border’ of the US

Following the meeting with Vice President Pence, the CARICOM leaders were also engaged by several members of the US Congress.

The CARICOM heads of state and delegations were participating in the eight Summit of the Americas hosted by the Organization of the American States under the theme “Democratic Governance against Corruption”.

World leaders from the Caribbean, Latin America, the US and Canada adopted the Lima Commitment in line with the theme and have pledged to do more to eradicate corruption in public officers.