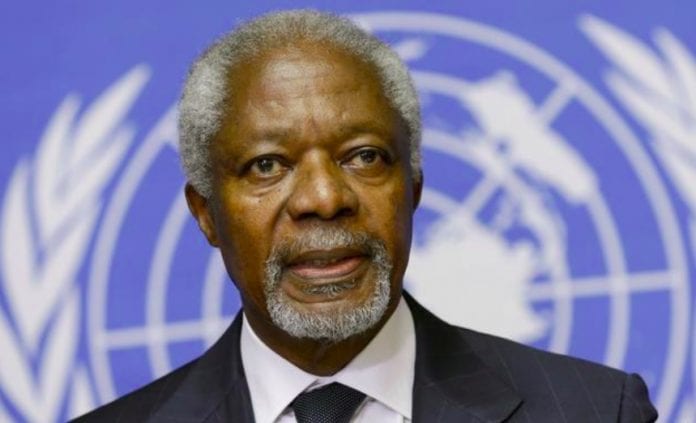 Caribbean countries have paid tribute to the late former United Nations secretary general, Kofi Annan, who died Saturday at the age of 80. Annan, was the seventh Secretary-General to lead the UN, during the period 1997-2006.

Jamaica’s Prime Minister Andrew Holness described Annan as “a humanitarian icon who served with distinction during his two-term tenure and was the epitome of a dedicated and committed international civil servant. Among his most significant pursuits was his persistent call for governments to be held accountable for the treatment of their people.

“The former UN secretary general was also an architect of the Millennium Development Goals which, for the first time, set global targets on issues such as poverty and child mortality. These and other humanitarian accomplishments earned him the Nobel Peace Prize jointly with the UN in 2001.”

The Bahamas government described Annan as “a global statesman who always strived for the best in finding common ground to resolve differences in the world,” The  Hubert Minnis government said Annan’s “contributions to issues that are impacting our world are part of his legacy that will continue for time to come. The World has lost a true Ambassador and Internationalist.”

Meanwhile, Governor John Rankin led Bermuda tributes to Annan, noting that “Annan was a statesman and champion of peace who showed that moral leadership can make a big difference. “I have no doubt that then Governor Sir John Vereker was delighted to receive Mr Annan and his wife, Nane, at Government House in 2005. The Bermuda cedar tree which he planted in Government House gardens continues to thrive.”

Prime Minister of Barbados Mia Mottley said, “Barbados has lost a friend and the world has lost a skilled international statesman.

During his historic stewardship of the United Nations, Kofi Annan redefined, revitalized and brought a measure of reform to that premier multilateral organization. His achievements were many, but of particular significance and relevance to Barbados was his work on building an international development agenda.”

Kofi Annan, the first black African to serve as Secretary General of the United Nations (UN), died peacefully after a short illness.

The career diplomat, who was originally from Ghana, died in hospital in Switzerland.