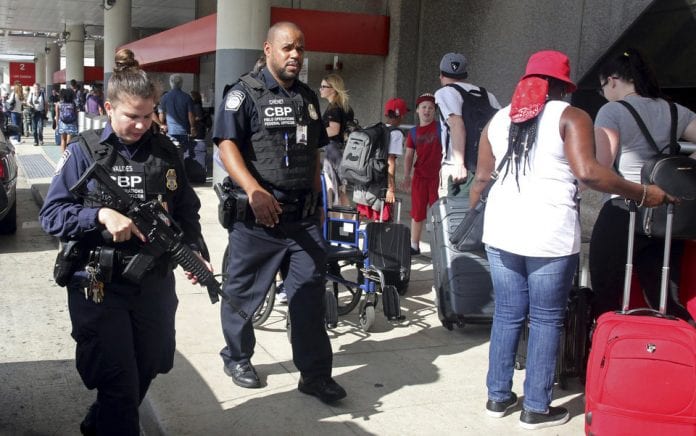 Although not physically harmed during last Friday’s tragic shooting at the Fort Lauderdale-Hollywood International Airport several Caribbean-Americans were severely inconvenienced by the tragedy. Many, who were planning to embark on ocean cruises, had to sit on aircrafts for up to six hours. In addition, several passengers were separated from their luggage, thus missing their cruise.

Kat and Myron Trott, Bermudians who reside in  Connecticut, landed at the airport shortly after 1:00 pm planning to take a shuttle from there to Port Everglades to embark on a cruise leaving later that afternoon. “However, we weren’t allowed to leave our plane until around 8:00 p.m., because of the shooting,” Kat told National Weekly.

The couple said, they and other passengers on the plane were “extremely alarmed, to see people rushing from the Terminals onto the tarmac. “We immediately thought it was some massive terrorist attack,” Said Myron. “The flight crew apprised us of the situation. It was very uncomfortable sitting so long on that plane, especially with the limited toilet facilities. We were hungry and thirsty, although the crew handed out water. To make aggravate matters, when the couple deplaned they were unable to collect their luggage, “and of course we missed the cruise,” Myron said.

Also flying into the Fort Lauderdale airport on Friday were  Jamaican-American Phyllis Mckoy and three friends from Maryland. The four friends should have embarked on a seven-day Caribbean cruise leaving on Saturday afternoon. Mckoy said, the group “deliberately came in a day earlier to prevent any delays. Can you believe we were unable to make the cruise which we planned for six months.”

Mckoy said they were in Terminal 1 waiting for their luggage “when all hell broke loose. Everyone began running out onto the tarmac.” She and her friends were unable to leave the airport until around 10:00 pm on Friday when busses took them to lay-over at Port Everglades.  In the rush from the Terminal one of her friends lost her handbag with her keys, driver’s license and credit cards.

According to reports, several Cruise Line ships  scheduled to depart from Port Everglades and Port Miami on Friday evening, Saturday and Sunday delayed their departure to accommodate passengers who were delayed by the airport tragedy.  However, according to Lauren Holness, cruise agent at Port Everglades,  “quite a number of passengers still missed their boats.”

Vanessa Picariello, a representative of Norwegian Cruise Lines, indicated  passengers who were booked, and could prove they missed their flights because of Friday’s will be able to rebook their original reservations.

Mckoy said she wanted to thank Broward County officials “for the courtesies in accommodating us, from being transported to Port Everglades, making sure we were attended to, to returning is to the airport.”

On Tuesday, Margaret Stapleton, communications officer of Broward County said, “significant progress” is being achieved in returning over 23,000 items of passenger baggage and personal items that were left at the airport to their owners.