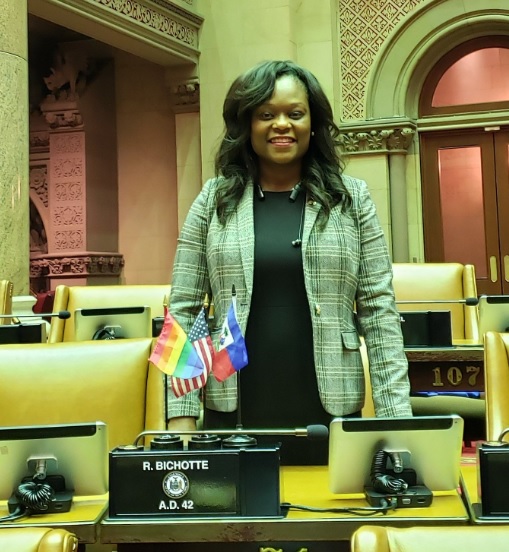 NEW YORK, CMC – Caribbean American legislators in New York have called for international support for Haiti, as the country observed the ninth anniversary of the devastating 2010 earthquake.

“Haiti still needs our help,” said Bichotte, who represents the 42nd Assembly District in Brooklyn, stating that the 7.0 earthquake that hit Haiti on January 12, 2010 claimed hundreds of thousands of lives and displaced millions.”

Since the massive earthquake, Bichotte said Haiti has been “battling the subsequent cholera epidemic and the multitude of natural disasters.”

But, in the midst of the struggle to rebuild, the assemblywoman laments that US President Donald Trump has decided to end Temporary Protection Status (TPS) for over 50,000 Haitian immigrants.

“The White House’s decision adds insult to injury with the mounting catastrophes and distress. “I will continue to speak out against the rescission of TPS for Haitians and for the preservation of basic human rights for Haitians and all Americans,” Bichotte added. “Let’s take a moment of silence for Haiti and the people of Haiti.”

As a representative of the largest Haitian community in the United States outside of Florida, Williams said he takes “very seriously the responsibility of contributing to the ongoing mission of remembrance, recovery and rebuilding.

He noted also that Trump ordered the end of TPS, put in place after the 2010 earthquake, “despite the ongoing suffering from this earthquake and additional, mounting natural disasters such as Hurricane Matthew.

In commemorating the aniversary of the 2010 earthquake, the United Nations noted that  half of the Haitian capital, Port-au-Prince, was destroyed, 220,000 reported dead and 1 million residents displaced.

Staff at the UN Mission in Haiti were also affected, and there were 102 UN casualties, including the Secretary-General’s Special Envoy, Hédi Annabi, and his deputy, Luiz Carlos da Costa..

“It was the ‘biggest single loss of life in the history of UN Peacekeeping,’” the then-President of the UN Staff Union, Stephen Kisambira, said at the time.

The UN said one of the survivors was Sophie Boutaud de la Combe, currently the head of communications for the UN Mission for Justice in Haiti (MINUJUSTH), who was seven months pregnant at the time and just a few days away from home leave.

She had been in the headquarters of MINUJUSTH’s predecessor, the UN Stabilization Mission in Haiti (MINUSTAH), when the quake hit, according to the UN.

It said the building completely collapsed, but Boutaud de la Combe “managed to escape through a collapsed wall.

The UN said Boutaud de la Combe eventually returned to Haiti in 2013, “happy to be able to play a part in the rebuilding of the country, and honor her lost colleagues with her work.”

“A few months ago, there was an earthquake in the north of the country. The state was prepared, and they sent their people to support those affected, without MINUJUSTH involvement,” she said.

“It was not a major earthquake, but now the population knows how to react,” Boutaud de la Combe added. “And, most importantly, we hear regularly how important it is to build better, to build strongly in case an earthquake would hit, not to endanger the people.”