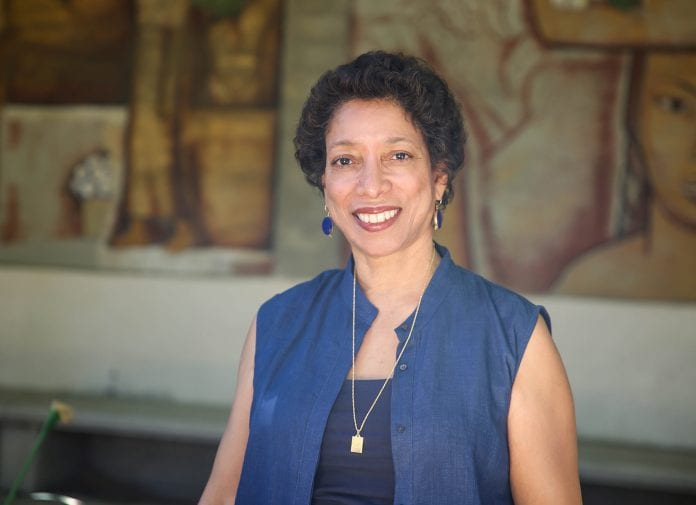 A poet laureate is a poet officially appointed by a government or conferring institution, typically expected to compose poems for special events and occasions.

Thompson, who was born and raised in Los Angeles, is the daughter of late Vincentians Brennan Irwin “Tom” Thompson and Cecily Thompson, née Hazell.

Garcetti said that Thompson – a winner of the Marsh Hawk Prize, Perugia Book Award and the Great Lakes Colleges Association’s New Writers Award – will serve as an official ambassador of Los Angeles’ arts community, “promoting poetry across the city and celebrating its rich literary tradition and culture.

“Lynne is an acclaimed writer and outspoken force who uses words to tell stories, bring communities together, and open up new avenues of art and thinking,” said Mayor Garcetti in a statement.

“Los Angeles is an international capital of creativity, a place for dynamic dreamers who shape global culture, ignite trends, and inspire — and I know Lynne will use her drive to show Angelenos and beyond the immense power of poetry,” he added.

The Los Angeles Poet Laureate Program is a collaboration between the city’s Department of Cultural Affairs (DCA) and the Los Angeles Public Library (LAPL).

“The aim of this effort is to enhance the presence and appreciation of poetry and the literary arts in Los Angeles, and to engage Angelenos who have limited exposure to poetry and other forms of expressive writing,” the statement said.

Thompson, a Los Angeles resident, said she was “humbled and honored to have been selected as Los Angeles’ next Poet Laureate.

“The city has a true recognition of the value of poetry in our cultural landscape, and I am excited about the opportunities ahead,” she added.

Thompson is the author of “Fretwork”, “Start with a Small Guitar” and “Beg No Pardon.”

In 2015, she received an Artist Fellowship from the City of Los Angeles.

Her other awards include the 2016 Stephen Dunn Poetry Prize and the 2017 Tucson Literary Award (Poetry).

One of Thompson’s poems was included in the 2020 Best American Poetry anthology.

Her most recent work appears or is forthcoming in Black Warrior Review, New England Review, Nelle, Pleiades and Colorado Review, among others.

“The city’s creative communities will be enriched by her belief that poetry can be used as a path of questioning and understanding to illuminate a broad range of issues,” she said. “I know her words will have a profound impact on the residents of our city and the next generation of aspiring poets.”

Thompson serves on the Boards of the Los Angeles Review of Books and Cave Canem, a nonprofit literary organization, and is chair of the Scripps College Board of Trustees.

She holds a law degree (juris doctorate) degree from Southwestern University School of Law in Georgetown, Texas, and a bachelor of arts in social psychology from Scripps College in Claremont, California.

“Thompson is an ideal choice to serve this city as the next Poet Laureate of Los Angeles,” said Los Angeles City Librarian John F. Szabo. “She is a powerful and compassionate storyteller, and her understanding of the cultural spirit of our city is unrivaled.”

To select the new poet laureate, Garcetti said DCA convened a peer review panel of three professionals: the executive editor of a literary review journal, a young Los Angeles poet and founder of a local poetry organization, and a university professor who has recently published an anthology of Los Angeles creative writing.

She is provided a contract-stipend of US$10,000 per year to perform her public services.