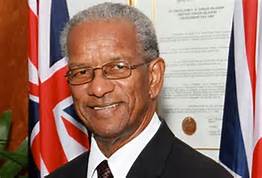 Premier D. Orlando Smith of the British Virgin Islands says the British Overseas Territory is recovering well following damage caused by recent heavy rains and “very soon we will return to a state of normalcy.”

In a statement, Smith said the airports and seaports have been fully functional the day following the impact of the tropical wave. He said, “The vast majority of government offices and businesses, including land-based accommodations and yacht charter businesses, are opened for business.”

The Premier said he’s continuing to receive update from the teams tasked with restoring roads, electricity, water supply and other essential services. Significant resources and equipment, both government and private, have been deployed to address critical areas.

“We have been able to assess where we are and while complete restoration efforts will take time, I assure you that steady and timely progress is being made,” he said. He added that technical drainage and landslide experts are expected to arrive to work with local teams to conduct damage assessments.

The government will be doing a full assessment in the coming days and weeks with engineers, Smith cited. Relief efforts for individuals displaced and severely affected have also been arranged and assistance is being provided as quickly as possible.

“I understand your needs are urgent and we are working tirelessly to meet those needs,” Smithy said.

The British Virgin Islands administration has been communicating with the United Kingdom authorities and other regional partners since the storm hit last Monday.

Smith has not given a cost as to the damage caused so far by the storm, but said “I am really pleased with the level of resilience and progress being demonstrated on the ground. We continue to make significant progress with finalizing our recovery”.