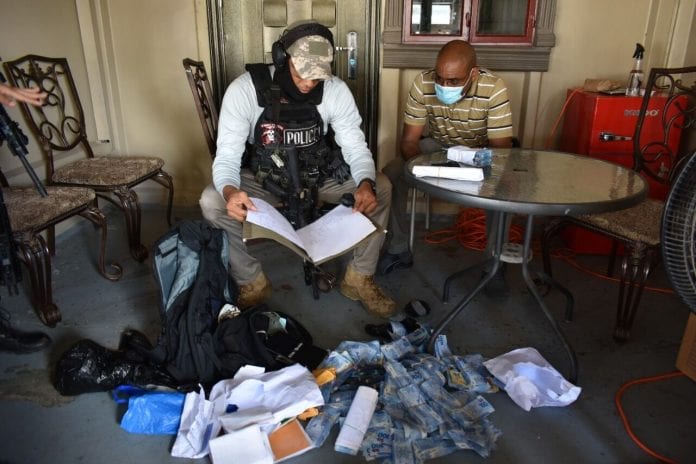 Prime Minister Dr. Keith Rowley says investigators from Britain and Barbados are being asked to conduct a probe into the multi-million dollar “pyramid scheme” that he has described as a threat to national security.

Police Commissioner Gary Griffith has since announced that four police officers had been suspended and 11 others transferred as investigations continue into the return of an estimated TT$22 million in cash to the DSS, commonly referred to as the Drugs Sou Sou, one day after police raided a house in La Horquetta on September 22, where the money was discovered.

Rowley, speaking at a public meeting of his ruling People’s National Movement (PNM) on Thursday night, said he was very troubled by the circumstances surrounding the scheme that is reportedly being led by a member of the Trinidad and Tobago Defence Force (TTDF).

“I approached the British government for help and we are awaiting British police officers in Trinidad and Tobago on that matter of the Drugs Sou Sou,” Rowley told the virtual meeting, adding “on the same matter, two senior Barbados police investigating officers are on their way to Trinidad and Tobago and they will form part of a team that will comprehensively examine this matter”.

He said it is hoped that the investigation would reveal ‘where, how, whom and why TT$22 million could have been found by the police, enter a police station, disappear after and nobody could tell the country what happened there.

“And members of the Defence Force could stand up on the front page of the newspaper and telling the country, I am the one organising that. Let me tell you all something that is not a sou sou that is a threat to the national security of Trinidad and Tobago.

And if we don’t investigate this properly it will be a cancer that will eat the soul of this nation,” Rowley said, noting that there are “big multi-national agencies in this country that can’t show you a profit of TT$22 million, if that is the figure, but TT$22 million in the hands of people in that way, the allegations that the police, have done this, the police have done that and the Defence Force have done that, this is a matter which threatens to undermine the very security of the state of Trinidad and Tobago.

“It is not to be left to drift. So very soon there will be a team of experienced police officers examining the Trinidad and Tobago police officers,” Rowley told the meeting.

A police statement issued here on Thursday said that based on preliminary investigations, it had become necessary to suspend the four policemen, two of them being senior officers.

It quoted Griffith as saying that the Professional Standards Bureau (PSB) was mandated to carry out the investigations into the return of the money.

“As a result, acting on the advice of the investigators, the Commissioner of Police has directed that certain persons be removed from the investigations to allow the entire probe to be conducted in the most transparent manner,” the statement added.

Last month, National Security Minister, Stuart Young, warned citizens against getting involved in rich quick schemes saying persons should not get involved in schemes that appear to be “too good to be true”.

He said that Financial Intelligence Bureau (FIB) of the Trinidad and Tobago Police Service (TTPS) is involved in “a fairly complex investigation.

“There are possible criminal charges, I leave that up to the police under the Proceeds of Crime Act and other pieces of legislation,” said Young, an attorney, adding that the “government is concerned and now is a good a time as any to warn the population of Trinidad and Tobago don’t get caught in any pyramid scheme.