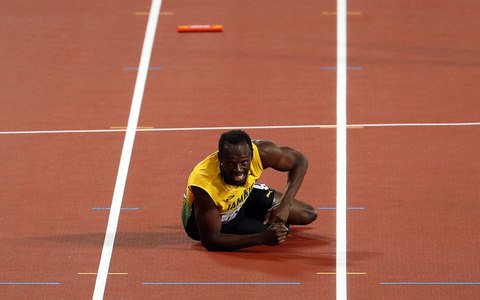 Usain Bolt’s final professional race of his career ended on a disastrous note. Unfortunately, he pulled up with a hamstring injury after collecting the baton in the final leg of the men’s 4X100 meters relay at the London World Games.

Bolt, Jamaica and the rest of the world, was hoping for a last burst of speed from the mercurial Triple world record holder. Sadly, his career ended with Bolt flat on his face and in pain. As hosts, Great Britain pushed back the rush of the United States to take the relay crown, with Japan third. Meanwhile. the man the world loved to see gallivant before and after races, laid on the track in a crumpled heap. His face buried in his hands.

No end to Caribbean’s woes

Bolt’s predicament on Saturday, painted a perfect picture of the Caribbean’s misfortunes at the London games.

In the men sprint relay, the Jamaicans were in pole position after the Caribbean’s only gold medal winner, Omar Thomas handed over to Julian Forte who in turn passed the baton to Yohan Blake, who himself had a disappointing run at the games. Bolt collected the baton cleanly from Blake in third place and a loud roar went up inside the packed London Stadium anticipating another scintillating win by Bolt and the Jamaican team. It soon turned to sighs of anguish as the darling of track and field grimaced and stumbled before falling to the chevron.

Earlier, The Jamaican women’s 4X100 meters sprint relay team with great determination by the young athletes finished third behind the Americans and British to earn the bronze medal. Surprising Jamaican best female sprinter Elaine Thompson did not join the relay team for neither the relay heats or finals.

The Caribbean’s only hope of gaining more medals comes on the final day of the games when the 4X400 meters men’s and women’s relays will be contested.