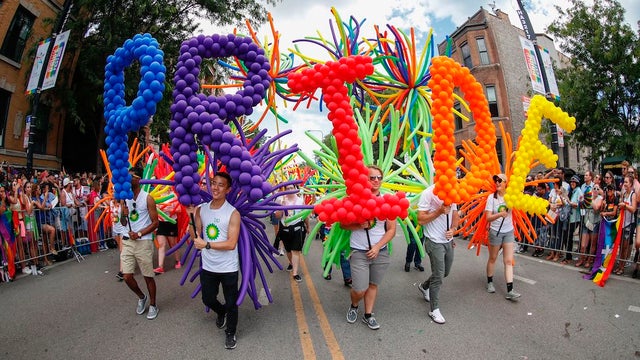 HAMILTON, Bermuda, CMC – A former cabinet minister whose Progressive Labour Party (PLP) government is preparing to go to the London-based Privy Council in a bid to re-impose a ban on same-sex marriage in the island has flown home from Brussels for Saturday’s first Gay Pride parade in Hamilton.

Former tourism minister, Renee Webb, who is now the government’s representative in Europe, said gay Bermudians should live without fear because her own same-sex relationship had never sparked hostility.

Organisers have not given an estimate of how many people they expect will join the parade. Businesses in the capital have offered their support with many flying rainbow-cloloured flags. The Corporation of Hamilton, which runs affairs in the city, has painted two crosswalks — including one on Queen Street — in rainbow colours.

Church leaders have said the celebration should be held in a culture of respect, despite individual religious beliefs.

More than 50 police officers will be deployed to tackle any trouble, but Acting Superintendent Hashim Estwick said he expected Saturday’s celebration to be “very safe”.

“What the Bermuda Police (Service) really want people to do is to celebrate in a safe environment and have some fun.

“We have in excess of 50 officers that will be available and there is a squad of marshals that will also be there to ensure that everybody’s safe. The persons involved in the parade are important and the protesters are important as well,“ Estwick said, adding “the message is, come out, be peaceful, kind and considerate to each other.”

Estwick said three areas will be designated for protesters, but it was up to individuals if they wished to use them.

David Northcott, one of the parade organisers, said it was an opportunity to “remember those who have gone before us”.

The date was chosen to mark the 25th anniversary of the so-called Stubbs Bill, which in September 1994 was passed by parliament and decriminalised sex between consenting adult men. Webb, then an opposition MP, was among the key lobbyists who helped the legislation to pass.

A singer scheduled to perform at the celebration said she had been bombarded with criticism after she agreed to appear at the event.

Joy Barnum said she was determined to perform at the event, despite hostility from people she knew, who told her they were “disappointed” by her decision.

“The comments were coming from all areas, church members, friends, family, saying they don’t want it forced down their throat.”

Webb’s attempt to add sexual orientation to the list of protected grounds in the Human Rights Act failed in 2006, when MPs rejected it, although only one MP, the late Nelson Bascome, spoke on the bill.

Bascome denounced homophobia, but added that the House of Assembly could not “legislate morality”. But Webb said the public mindset had changed.

“I’ve definitely seen a difference. For example, people were much more homophobic. I don’t find government members homophobic at all. They know I have a same-sex partner, they know my partner, and I haven’t had any form of discrimination at all on the island, none — never, from anybody.”

Webb, however, admitted she had heard “some very homophobic utterances” from MPs during debates.

“Some were outright shocking in how they referred to their fellow LGBT+ Bermudians and LGBT residents.”

The government confirmed earlier this year it had been given permission to take its legal bid against same-sex weddings to the Privy Council in London, the island’s highest court of appeal.

Webb, who was appointed as the government’s representative in Brussels last January, said that she respected religious viewpoints, but that she also respected the right of all individuals to equal treatment.

“Bermuda having its first Pride parade, for me, I think it’s excellent because it is time that we recognise the fact that everybody here belongs to Bermuda, whether they be gay, straight, indifferent, foreign, white, black.

“Bermuda is a society of diverse people and we should recognise all people as being equal before the law It has been a long journey from the Stubbs Bill to same-sex marriage.

“I’ve always been a human-rights activist, so for me, it’s just a given. I can’t cherry-pick what human rights I think should be implemented. I am looking forward to being a part of history by participating in Bermuda’s first Pride parade.

“From where I sit, Bermuda has evolved exponentially as a consequence of people being exposed, going abroad to school, working abroad, seeing that there’s no bogeyman and your LGBT+ brothers and sisters are just like you — except they’ve made a different choice in terms of who their partner is, the person they want to share their life with.”

“For me, communities, laws, governments have to respect their citizens and ensure that they have equal rights before the law.”

The Governor and the government issued messages in the run-up to the parade.

Governor John Rankin said “Bermuda’s first-ever Pride event is in line with the rights of freedom of assembly, freedom of conscience and freedom of expression guaranteed under the Bermuda Constitution and international human rights conventions.

“I hope that this will be an enjoyable event for all involved and, like many other events on the island, demonstrate both the inclusivity and diversity of the community in Bermuda.”

Acting Premier Walter Roban said Bermuda was a country with “diverse opinions, ideologies and a history of strong spiritual convictions”.

“We encourage everyone to be mindful of the diverse perspectives on our island and to seek peaceful, respectful and law-abiding means of expressing points of view.”

Winston Godwin, a Bermudian who challenged Bermuda’s same-sex marriage ban with his Canadian partner, Greg DeRoche, said a march in Bermuda was “a huge step in the right direction”.

“In Bermuda, we are so quick to sweep things under the rug if they challenge the status quo.”

Mark Anderson, a Bermudian entertainer, who is gay, said he was “ecstatic” that a parade would be held in Bermuda.

: “I think this is the right timing for it. Now Bermuda is going to be put on the map with all the other jurisdictions around the world — it will be recognised that Bermuda is joining the world in taking a stance with gay pride.”

The government’s legal bid at the Privy Council to ban same-sex weddings is likely to cost taxpayers as much as three million US dollars, marriage equality campaigners have suggested.

A challenge was brought against the act by Bermudian Rod Ferguson, with others joining the legal action.

Former Chief Justice Ian Kawaley ruled on their case in June last year, finding that the parts of the legislation that restricted marriage to opposite-sex couples were unconstitutional.

He agreed to a request from the government for his decision to be “stayed” pending an appeal, meaning gay couples could no longer wed.

Bermuda had earlier become the only country in the world to allow same-sex marriage and then ban it.

Between May 2017 and June 2018, 20 same-sex couples tied the knot — 14 on the island and 6 at sea. There have been two more same-sex marriages since the Court of Appeal’s judgment.

Three couples have entered into domestic partnerships since June 1 last year, with one more union pending.

Although Godwin and DeRoche became the first couple to be able to marry they chose to tie the knot in Canada instead.

A non-binding referendum in 2016 recorded a majority vote against the introduction of both same-sex marriage and civil unions.