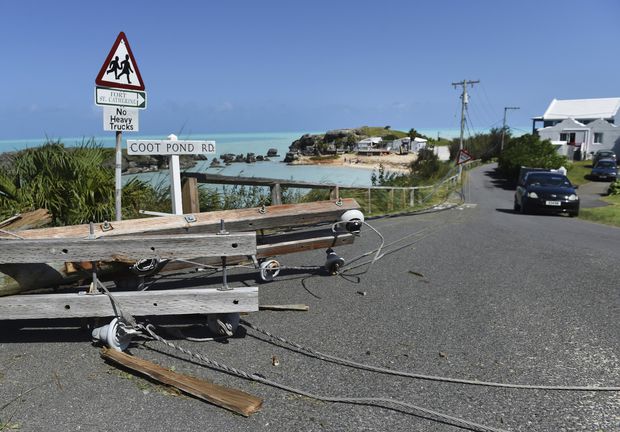 HAMILTON, Bermuda, CMC — Bermudians who suffered damage to their properties during Hurricane Humberto’s rampage through the island on Wednesday face a race against time to get repairs finished before the next storm arrives.

Jerry, the 10th storm of the Atlantic season, has weakened to a tropical storm, but remains on course to hit Bermuda on Tuesday as a Category 1 hurricane, according to forecasters.

Bermuda last suffered a one-two punch inside a week when Hurricanes Fay and Gonzalo struck the island in October 2014.

Before Humberto — in which 80 percent of the island lost power and one person severed a finger readying for the storm — Bermuda had escaped hurricanes since Nicole, a Category 3 hurricane, hammered the island in 2016.

Humberto ripped off roofs and knocked down utility poles and left farmers counting the cost of the storm.

On Friday, National Security Minister Wayne Caines told residents of this British Overseas Territory with a population of around 64,000 not to take down the storm protection they put up for Humberto.

“I would like to encourage Bermuda to stay prepared. Let’s keep our level of being prepared up. Do not let your guard down. It is our recommendation that you leave things boarded up and remain in a state of readiness,” Caines said.

More than 28,000 lost power during the storm. A spokesman said the company aimed to have power fully restored by the end of Monday.

Hamilton docks were open just 24 hours after Humberto, and Caines said there had been “no indication from any grocery stories that we are running low on supplies”.

But from autumn seedlings to Christmas carrots and poinsettias, Humberto left farmers and nurseries counting the cost.

The battering destroyed greenhouses around the island.

Supplies of everything from cucumbers to bananas have been hit, while farmers rush to batten down ahead of Jerry.

“Everything in the field is basically toast, and the roof came off our greenhouse. We got a hard hit,” he said.

Cassava, another Christmas staple, managed to survive because plants had been topped in advance, but Wadson said his farm had “a couple of tons” of pawpaws on the ground.