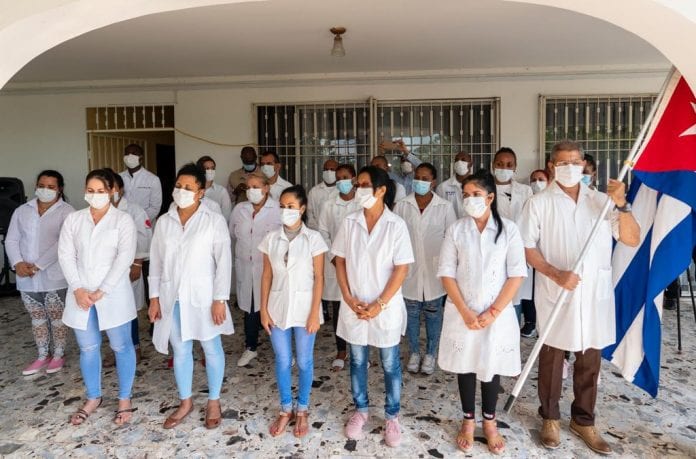 BRIDGETOWN, Barbados – Barbados says it has no intention of ending a programme through which Cuban nurses are engaged in the fight against the coronavirus (COVID-19) on the island, despite a threat by the United States to target countries benefiting from the “medical missions” from Havana.

“Barbados is a sovereign country and we make decisions in the interest of the country just like other countries large and small. We have engaged the nurses from Cuba. Barbados had diplomatic relations with Cuba when other countries were trying to do the same . . . and we are not going to buckle under the pressure of any other nation,” said Health Minister, Jeffrey Bostic.

He told a branch meeting of the ruling Barbados Labour Party (BLP) in St. Phillip, south-east of the capital on Sunday evening that Bridgetown would maintain its policy of being “friends of all, satellites of none”.

Florida Republican Senator Rick Scott has introduced a new bill that would target countries that hire Cuban doctors through the “medical missions” controlled by the island’s government.

Scott is being supported by Florida and Texas Republicans, Senators Marco Rubio and Ted Cruz. He said the Cuban government was participating “in the human trafficking of doctors” and that any country that requests medical assistance from Cuba is aiding such efforts.

Rubio also called the missions “a form of modern-day human trafficking,” but the Cuban government, which has almost 30,000 healthcare workers contracted in more than 50 countries, including in several Caribbean Community (CARICOM) countries, has dismissed the accusations and insists that the missions are examples of cooperation and solidarity.

Bostic said that Barbados was doing what was in the interest of its people and the nurses would remain here “because we expect we will have more cases and we are a tourism-based country which depended on almost 40 per cent of GDP”.