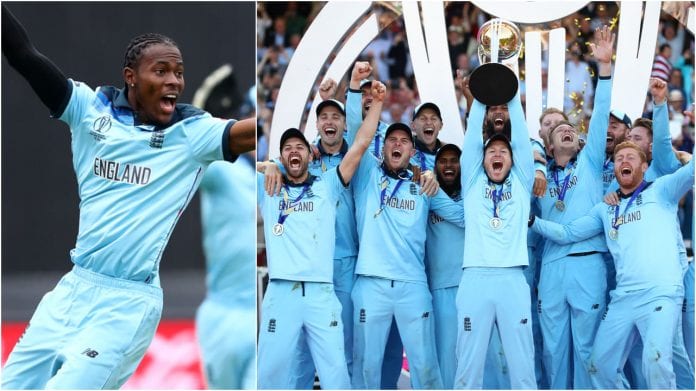 Asked to bowl the decisive nerve-jangling over after scores were tied at 241 in the 2019 final, the 24-year-old, who made his England debut just two months ago, remarkably held his nerve to deliver for his adopted country.

Man-of-the-Match Ben Stokes and Jos Buttler scraped 15 runs after England off England’s Super Over, leaving rookie Archer – with a mere 14 One-Day Internationals to his name – with the task of defending the target.

He started nervously, sending down a wide before Jimmy Neesham took two to long-off off the second delivery. Neesham then crunched the third ball over mid-wicket for six, leaving New Zealand with seven to get off three balls.

Archer opted for full-length deliveries for his next two balls, both of which were squeezed away by Neesham for twos, before a single off the fifth ball left New Zealand with two to win off the final delivery.

Archer speared the delivery into the pads of Martin Guptill who clipped to mid-wicket but found himself short of his ground as he came back for the vital second run. Afterwards, Archer hailed the influence of Stokes, Test skipper Joe Root and captain Eoin Morgan during the nervy Super Over.

“I actually went to Morgs first. I had an idea I was going to do it but I wanted to double-check that he wanted me to do it,” Archer said. “I think it was going fine until the six, and then Stokes told me even before the over: ‘win or lose, today does not define you. Everyone believes in you.’

“To back up what he said, if we did lose there is a T20 coming up next year and I would have another chance.” He added: “Rooty came up to me and said some inspirational words as well. I knew that if we did lose, it wasn’t the end of the world. I am glad that the guys look up to me and they trust me to do it.

“The skipper really believed in me, even after the six. A lot of captains could have had their head in their hands, but he was really calm and really understanding.”

Archer had earlier captured one for 42 from a miserly 10-over spell to help restrict New Zealand to 241 for eight off their 50 overs, after they had opted to bat first. Henry Nicholls top-scored with 55, Tom Latham got 47 while captain Kane Williamson chipped in with 30, as seamers Chris Woakes (3-37) and Liam Plunkett (3-42) got the wickets.

In reply, England were slumping at 86 for four in the 24th over before Stokes smashed 84 not out and Buttler, 59, in a 110-run, fifth-wicket stand to revive the run chase. England needed 15 from the last over and then two off the last ball but Mark Wood was run out coming back for a second run with Stokes.

Archer, who only qualified to represent England earlier this year after the England and Wales Cricket Board suddenly amended their eligibility rules, said he could not have asked for a better start to his international career.

“I have had the best two months of my life so far – making my debut, making my World Cup debut, playing in the final in the space of two months.

He continued: “I hope that any kids watching that want to play cricket now for the whole week, for the whole year and try to pursue it to be professional. We want to inspire the next generation because someone will have to take over from us.”