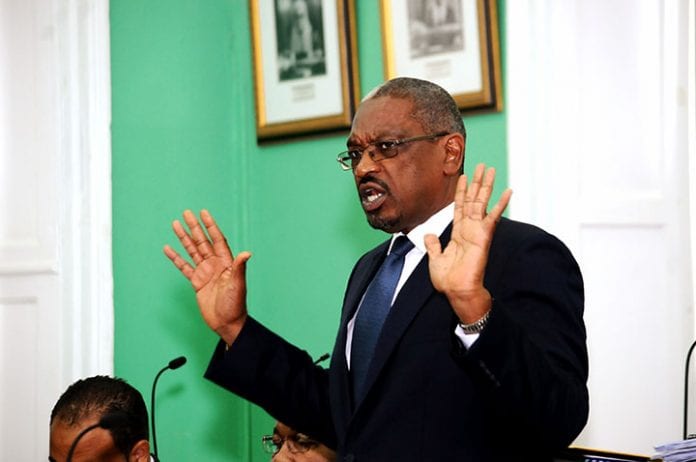 NASSAU, Bahamas, CMC – Prime Minister of Bahamas Dr. Hubert Minnis said he held talks with officials of the International Organization for Migration (IOM) and warned illegal migrants they should either leave the country voluntarily or be “forced to leave”.

Minnis statement in Parliament is the latest by his administration warning illegal migrants who survived the passage of Hurricane Dorian on September 1 killing at least 56 people and leaving millions of dollars in damage, that the government would be implementing ts deportation of illegal migrants in keeping with the law.

“This morning, Mr. Speaker, I met with represents of the IOM and they were informed that we are a country of laws and our laws in respect to illegal immigrants… will be carried out; however, they will be carried out in a humane manner.

“Therefore, I serve notice to all those who are illegal that they can leave voluntarily or they will be forced to leave,” Minnis told legislators.

“We condemn this sudden about-face from the government’s earlier declaration that it will not target migrant the victims of the storm, and denounce the scheme for what is clearly is – a shameful attempt at political posturing aimed at currying favour with xenophobic elements of the populace,” the group said in a statement.

Immigration Minister, Elsworth Johnson, had earlier this week said the shelters would not be used “to circumvent the law.

“If you’re in a shelter and you’re undocumented and you’re not here in the right way, you’re still subject to deportation and the enforcement of the immigration laws,” Johnson said, adding “the government of The Bahamas fully appreciates that we are a country of laws. We’re governed by the rule of law”.

Attorney General Carl Bethel said migrants who have lost their jobs as a result of the hurricane “need to go home” even if their work permits have not yet expired,.

In a statement, the Department of Immigration warned prospective employers of storm victims that need work permits must prove their applicant has satisfactory living conditions because if they don’t, they will be denied.

“The public is advised that non-nationals seeking employment in The Bahamas must be approved by the Immigration Department and that applications for the issuance of the first work permit will not be accepted or considered unless the individual is physically present and resident in his or her country of origin at the same time that the first application is made,” the Department of Immigration said.

The hurricane, which swept through the archipelago, caused widespread damage on Grand Bahama and the Abacos Island, and Prime Minister Minnis said he had directed Bethel to forcibly acquire the land on which multiple shantytowns in Abaco were built.

“Mr. Speaker, I’ve said before that we will eradicate shantytowns and return laws to our country,” Minnis said, adding “I’ve heard noise… about the property of the shantytowns, so I’ve informed the Attorney General to compulsorily acquire the Mudd, Pigeon Peas, Sand Banks and other related areas”

Prior to the hurricane, Haitian nationals were the main occupants of the shantytowns and Rights Bahamas said it “is the height of cynicism and cruelty” when the government is moving to deport people who “have lost their homes, jobs, everything and then declare that they must prove they are employed and “satisfactory living conditions” – whatever this arbitrary phrase is supposed to mean”.