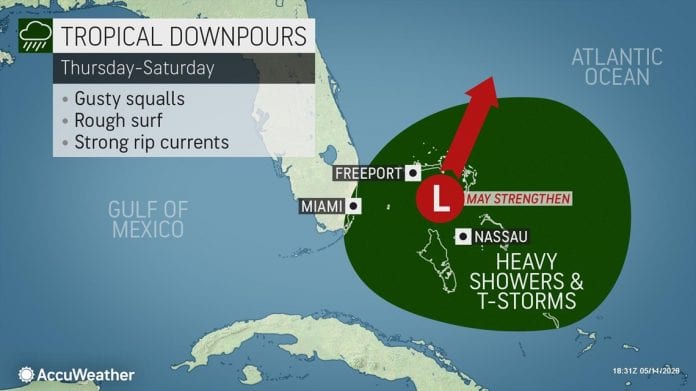 NASSAU, Bahamas – The National Emergency Management Agency (NEMA) is in the process of monitoring a weather disturbance that could threaten the country by this weekend.

In a statement on Wednesday, NEMA said that a broad area of low pressure located about 1,000 miles east of the Windward Islands is being monitored for possible development into a tropical storm, as environmental conditions are conducive for its growth.

“The system is moving generally west northwestward at 15 to 20 mph. Computer models presently indicate that this system is to eventually move into The Bahamas by Sunday, with the likelihood of it strengthening into a hurricane as it passes through the our chain of islands,” said Trevor Basden, director of the Department of Meteorology.

“Based on current projections, the Department of Meteorology will likely issue alert messages starting Thursday.”

Residents have been advised to closely monitor the progress of the system and to heed local advisories.

This follows an announcement earlier this week in which Prime Minister Dr Hubert Minnis reversed the harsh seven-day lockdown imposed on New Providence a day earlier, which mandated the closure of food stores, water depots, private pharmacies, and gas stations.

In a statement explaining the reversal of his decision, Minnis said the decision was made after Cabinet was briefed by weather officials on a storm that may impact the country and after residents raised concerns with him.

Meanwhile, a Tropical Storm Watch is in effect for the islands of Saba and St. Eustatius, St. Maarten Antigua and Barbuda, St. Kitts Nevis, and Anguilla.

A Tropical Storm Watch means that tropical storm conditions are possible within the watch area, generally within 48 hours.

The Miami based National Hurricane Centre says that interests elsewhere in the northern Leeward Islands, the Virgin Islands, and Puerto Rico should monitor the progress of this system, as additional tropical storm watches or warnings will be required for portions of those areas later in the day on Thursday.

The hurricane season runs from June 1 to November 30.