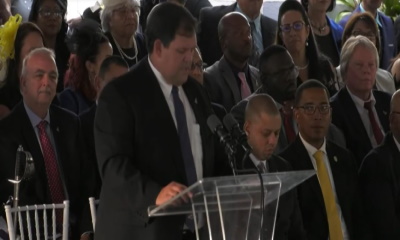 Attorney Wayne Panton was elected unopposed as Premier of the Cayman Islands one week after a general election.

He said that the occasion on Wednesday “is no doubt a precious gift, so we should be forever thankful to the former premier….”

Former premier Alden McLaughlin had asked Governor Martyn Roper to dissolve Parliament on February 14 and the change was seen by political observers as a move to avoid a no-confidence motion against Speaker McKeeva Bush, who had received a two-month suspended jail sentence in December 2020 for assaulting a woman in February that year.

Bush was re-elected to the post of Speaker on Wednesday and told the legislators “the campaign is over, we have a tremendous responsibility before us to serve our people”.

He praised the election of Panton as head of the government, describing him as a “capable lawyer and businessman” and vowed to help him “control us for the betterment of our people.”

“This cabinet is as good as any I have seen. They must be given the chance to do the work they were elected to do. With the manifestos of all of us and the demands and needs of our people, we have enough to do,” Bush said, adding “Caymanians must pull together and there is no time to bicker and plot.”

Governor Roper in a brief speech during the first sitting of the new Parliament, praised the election supervisor Wesley Howell and his team, making mention of the high turnout at the polls.

“You are privileged to have been chosen by our people to represent them… I urge you to have the best interests of the people of these wonderful islands in your hearts and minds,” Roper said, adding that the challenges ahead are to “reopen the borders and build back better in the midst of this global pandemic”.

Roper praised McLaughlin for his service and his leadership during the coronavirus (COVID-19) pandemic, saying he is looking forward to working with the new government, respecting the autonomy of Cayman’s parliament and playing his part as the UK representative to ensure a bright future for the islands.

Of the 19 elected members of the new Parliament, seven are chosen to serve as government ministers in a cabinet headed by the Governor, who also appoints the Premier.

“I want to thank all Caymanians for giving all of us a life of purpose. It is the Caymanian people why we are gathered here today to witness the peaceful transfer of an administration as required by our Constitution,” Panton told the ceremony.

Panton told the ceremony that the event would not have been possible without the voters “coming out by the thousands to exercise your democratic franchise and for that, all of us who contested the general election are very thankful for your participation”.

Former finance minister and the leader of the Progressives party, Roy McTaggart, was sworn in as the Opposition Leader.

Prior to the ceremony, McTaggart had been canvassing for the position of head of government but conceded that the battle for the government was and that Panton had been able to muster the necessary support to form the new government.