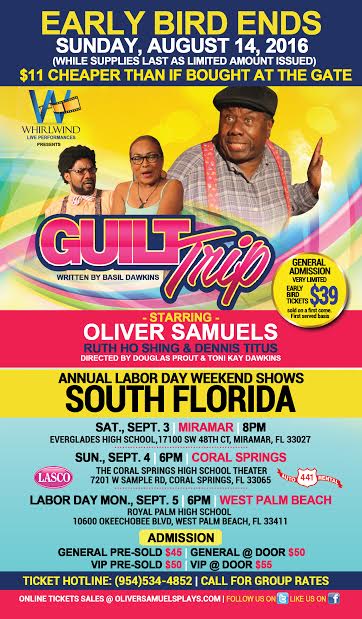 From Belgium, to Costa Rica and recently the Dutch isles, Jamaica’s Oliver Samuels seems to be carrying the torch of Caribbean theater all over the world. Florida residents will get six shows from Samuels this year for the Annual Labor Day weekend offering fans the ability to secure a seat to the performance.

When asked for a comment, Whirlwind’s Live Performances CEO responded, “Naturally, we are disappointed that our home base of South Florida only got three shows but as patriotic Jamaicans and lovers of the arts, we are thankful that Oliver’s marketability continues to grow so we know we have to share with our neighboring communities.” When probed about how his Company has handled such exponential growth of the years, he continued “We haven’t been perfect, for example, we acknowledge that they were long lines to get in to the shows over the last two years and we have made some changes and added more staff to speed up the process.”

One such change is the move of the South Broward show from the Suzan B Katz theater off Sheridan Street to Everglades High School in Miramar September 3. Coral Springs High school that had to open extra parking lots to accommodate last year’s crowd will have all parking lots open early, September 4.  Also, the Labor Day show in West Palm Beach is going to be held at Royal Palm Beach High School, September 5. Jamaicans all over the world have endeared Oliver Samuels over the years, but it is clear based on the number of shows and the support over the years, Florida is certainly a special place for Oliver.