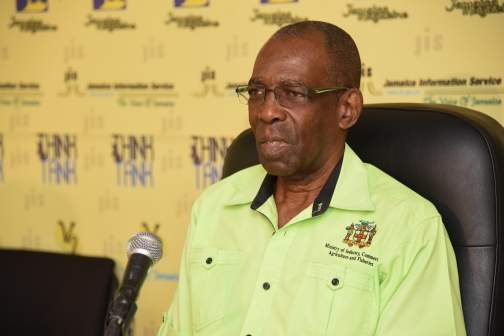 KINGSTON, Jamaica – Prime Minister Andrew Holness on Friday reassigned J.C. Hutchinson, the government minister without portfolio in the Agriculture Ministry, who has been embroiled in controversy over a land deal in the southern parish of St. Elizabeth.

Hutchinson has been assigned to the Office of the Prime Minister (OPM) with immediate effect.

His position in the Agriculture Ministry will be filled by Leslie Campbell who was recently appointed to the Ministry of Economic Growth and Job Creation.

In a statement on Friday, the OPM said that following discussions with Hutchinson, the Prime Minister said he was satisfied with his actions – which were to make former sugar farm lands available to small farmers and this was in keeping with government policy.

However, Holness said there were clear breaches of established procedures in implementation to provide for transparency, competition and disclosure.

The issue surrounds the Holland Estate and controversial deal that relates to the decision by SCJ Holdings to allow a company, Holland Producers Limited, to take control of more than 2,000 acres of land in the parish based on a recommendation from Hutchinson.

Hutchinson also issued an aplology to the Prime Minister, the governing Jamaica Labour Party (JLP) and his colleagues in the Cabinet.

“My actions were never designed for personal benefit but arose out of a conviction that strong and decisive action was necessary to preserve the Holland Estate lands for small farmers,” he said.

“There was a real risk that without strong and decisive action the Lands would have been overtaken by squatters and stray animals as has happened in the past….I was wrong. The course of action I chose cannot be defended. Though my goals were noble, the procedure I used was flawed and the ends do not justify the means.

Throughout my long career in public life, I have acted with probity and adhered to high standards of conduct. I trust that my contrition and the sincerity of my apology for this error is self-evident and that, in the end, I will be judged by the totality of my contribution to public life.”

Meanwhile the main opposition People’s National Party (PNP), blasted the Prime Minister for adopting a strategy of “shifting around Ministers, who are guilty of policy breaches to Jamaica House and to new portfolios and keeping them in the cabinet to oversee the same policies.”

The party also called for the removal of Hutchinson from the cabinet for “clear breaches of established procedures”.

PNP General Secretary, Julian Robinson called the Prime Minister’s action “unacceptable” noting that it was the second time within a month that a minister involved in controversy has been given a new assignment.

“This was unacceptable and runs counter to Ministerial sanction in the face of wrongdoing, including corruption, nepotism and cronyism,” the party’s statement said.

The PNP also added that it “does not regard Ministerial portfolio changes as sanctions and as such these changes should not be considered punishment for wrongdoing. Reshuffles are in keeping with normal Prime Ministerial administrative powers and discretion.”