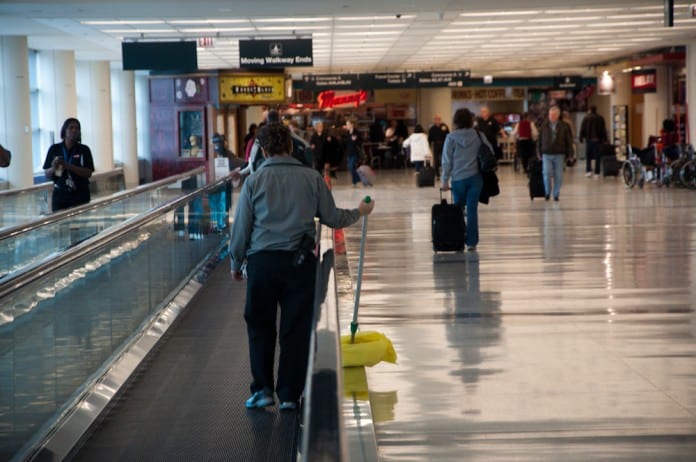 Contract workers at Fort Lauderdale-Hollywood International Airports, including janitors, cabin cleaners, and wheel chair operators, celebrate after Broward County Commission voted to increase contract wages to a minimum of $11.68 per hour plus health benefits, or $13.20 per hour for workers without the health option. The increases, which affects some 1,700 workers, take effect on January 1, 2016.

The vote follows the employees’ passionate campaign for living wages, as many earned below the state’s minimum $8.05 per hour. Many, like wheel chair operators, earned an average of $5.50 per hour, which were to be supplemented by tips, but were never guaranteed.

Malcolm Dessalines who previously shared with National Weekly his family’s struggle to live solely on his and his wife’s income as airport employees, was emotional over the news, praising the Commission’s decision.

“We have waited so long for this, over three years,” says Dessalines, who will receive a $5.15 an hour increase. “I can’t tell you how much difference these extra dollars will make in my family’s life. Now I can pay the rent on time and don’t fear eviction, and can also buy food.”

The dispute over airport workers’ wages has been a long one. Unlike other county workers who receive a living wage of $13.20 and $11.69 per hour, these workers were exempt due to their separate contracts with service companies employed by the various airlines operating at Fort Lauderdale-Hollywood Airport.

In 2012, Broward Commissioner Dale Holness and former commissioner Kirsten Jacobs began dialogue with the contractors to increase the wages, but met little success. The contractors claimed such increases would be against Federal Aviation rules.

But, with the unanimous vote to pay the airport workers a living wage, they are now considered county workers.

“This is the right thing to do,” said Holness.”No worker should have to earn a wage or a salary that’s so low they can’t afford the basic standards of living.”

Now new contracts are being prepared between the county and the respective airlines to start the new wage scales by January 1.