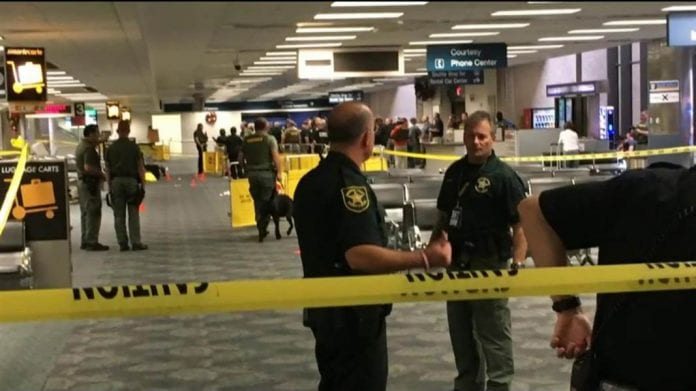 Esteban Santiago Ruiz (Santiago), 26, an Alaska resident who was arrested and charged in a federal criminal complaint in connection with the deadly shooting of multiple victims at Fort Lauderdale-Hollywood International Airport on Friday, January 6, is scheduled to appear at a Broward Court today. He will appear before United States Magistrate Judge Alicia O. Valle in Fort Lauderdale, at 11:00 a.m.

Santiago is charged with violations of performing an act of violence against a person at an airport serving international civil aviation that caused serious bodily injury; using and carrying a firearm during and in relation to a crime of violence; and causing the death of a person through the use of a firearm in the course of a violation.

The statutory charges authorize a maximum penalty, upon conviction, of death or imprisonment for life or any term of years.

In a statement US Attorney Wilfredo Ferrer said, “The U.S. Attorney’s Office expresses our deepest condolences to the victims’ families and to all of those impacted by this tragedy. Our Office commends the first responders, civilians and law enforcement partners who came together to provide assistance to those in need and support the ongoing investigation. The charges represent the gravity of the situation and reflect the commitment of federal, state and local law enforcement personnel to continually protect the community and prosecute those who target our residents and visitors. As the investigation unfolds, we will continue to pursue all leads and evidence in this matter.”

“Our condolences are with the victims of this heinous crime and their families,” said George L. Piro, Special Agent in Charge, FBI Miami. “I want to ensure these families that law enforcement is working tirelessly to ensure justice is served.”

According to the criminal complaint, on January 6, 2017, at approximately 12:56 p.m., Santiago was present in the Terminal 2 baggage claim area of the Fort Lauderdale-Hollywood International Airport, when he pulled out a handgun. The area was crowded with newly-arrived passengers retrieving their luggage. Santiago started shooting, aiming at his victims’ heads until he was out of ammunition. Santiago killed five people and wounded six more. Moments later, Santiago was confronted by a BSO deputy. He dropped his handgun on the ground and was arrested by BSO deputies.

The case is being prosecuted by Assistant United States Attorney Ricardo A. Del Toro with assistance from Department of Justice Trial Attorney Larry Schneider.