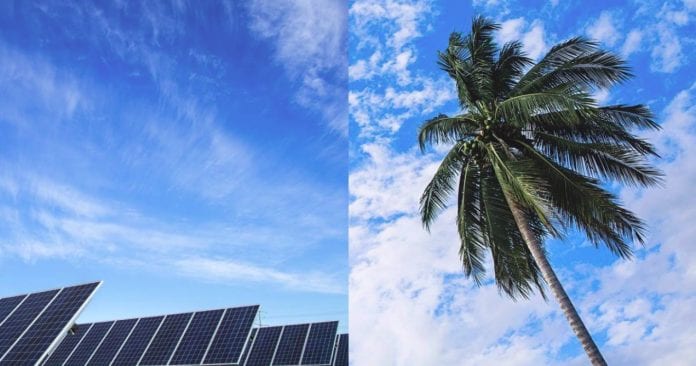 Hurricanes last September left unprecedented devastation across the Caribbean, traumatizing the lives of many people, while whole communities and towns were decimated. The global community has acted quickly and given generously to relieve suffering and help to rebuild. Alongside the on-going emergency response to the region on Tuesday, Caribbean leaders announced the launch of a new public-private coalition to create the world’s first “climate-smart zone”.

The Caribbean Climate-Smart Coalition aims to find a way to break through the systemic obstacles that stop finance flowing to climate-smart investments. With the right domestic and international reforms, the world can step up – and help unleash the means to catalyze an ambitious US $8 billion investment plan to bring greater energy and infrastructure resilience to 3.2 million Caribbean households. This would help Caribbean islands to eliminate their costly dependency on fossil fuels so that they can meet close to 100% percent of their energy needs from renewable sources, and to embed resilience into communities and livelihoods to realize the bold ambitions of all Caribbean people.

The announcement came at the One Planet Summit hosted by French President Emmanuel Macron in Paris to review progress made on the Paris Agreement adopted by global governments two years ago today.

To meet their goals, the Caribbean leaders brought together a coalition of global organizations including the Inter-American Development Bank, the World Bank and the Caribbean Development Bank, plus businesses and supporters from the Caribbean and the international community. The Coalition aims to reinvigorate the countries impacted by recent hurricanes Irma and Maria, and help build more resilient infrastructure and communities across the region as the likelihood of future extreme weather events increases.

Coalition members will help to establish partnerships that can make investment deals happen. They will also bring their collective abilities together to break down the technological and financial barriers which represent the last obstacles to Caribbean people grasping the transformational opportunities that are in reach.

Several prominent Caribbean and international personalities addressed the annoucement of the initiative:

Prime Minister Keith Mitchell of Grenada, Chair of CARICOM, said: “Caribbean leaders have come together as a powerful collective to build a better future for the people of the Caribbean. We welcome the financial commitments from our partners.”

Prime Minister Roosevelt Skerrit of Dominica, said: “Despite the immense human suffering and economic damage caused by the recent hurricanes, the people of the Caribbean do not want to be just passive victims of climate change. Rather, they want to be active participants in designing and implementing solutions, and for their Caribbean region to serve as a beacon of hope for island nations all over the world.”

Luis Alberto Moreno, Inter-American Development Bank Group President, said: “The IDB Group reaffirms its continued and historical commitment to the Caribbean and will work with leaders of the region to improve lives by creating climate-smart and vibrant economies, where people are safe, productive, and happy.”

Jim Yong Kim, World Bank Group President, said: “The Caribbean is in the ‘eye of the storm’ and we need coordinated international support to rebuild and better plan for the future. At the World Bank Group, we welcome the Caribbean Climate-Smart Coalition and plan to support it so countries get back on their feet and are better able to deal with the growing frequency and intensity of storms and hurricanes.”

Warren Smith, President of the Caribbean Development Bank, said: “The destruction our Region experienced during the 2017 Atlantic Hurricane Season emphasizes that we cannot afford to take a business-as-usual approach in tackling climate change. CDB, therefore, welcomes the establishment of the Caribbean Climate-Smart Coalition. The Bank shares the vision of the Coalition and look forward to supporting and investing in solutions to accelerate progress towards achieving this goal.

Prime Minister Allen Chastanet of St. Lucia, said: “Ultimately, we will only win the battle on climate change when investments in climate action and broader resilience become the economically sensible decision to make every time. It’s not just about protecting against negative impacts – climate action needs to be about enhancing competitiveness, creating jobs, improving our economies.”