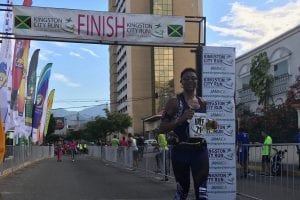 Although the days are getting shorter in some parts of the world and the temperatures are dropping, there’s a place where runners can experience tropical bliss and fitness in a singular event.

Raising funds for the homeless

The event was conceptualized to help raise funds to support projects for the homeless in Kingston and to raise the awareness of Kingston as a travel destination.  Since the inaugural event in 2013, it has grown in popularity, attracting large numbers of overseas visitors to participate in the three distance races.

Local WAVS radio personality Pat Montague will be among the many South Floridians making the trek to participate. “I look forward to participating in the annual Kingston City Run 1/2 Marathon, 10K and 5K Run/Walk. Apart from the great parties, reconnecting with friends and visiting my hometown, its mission to raise awareness and money to support sustainable program for the Homeless population in the City makes my participation and experience worthwhile.”

The races normally begin in the early morning hours on Sunday, March 18th at the historical Emancipation Park in upper Kingston or New Kingston. Runners run through the scenic streets of new Kingston for the 5k, 10k, and the half-marathon, experiencing the vibe of this major Caribbean city while taking in the eclectic attractions and entertainment sites.

Best way to get scenic view of Kingston

“is one of the best ways to do a scenic tour of Kingston’s iconic places including the famous Devon House, Emancipation Park, Kings House (home of the Governor General), Hope Zoo and Gardens and even run past the ‘King of Reggae’s’ former home, the Bob Marley Museum. ”Whether you live in Jamaica or are visiting, it’s one of the best running tours you will ever do,” she added.

During the event this year, some 250 runners participated in the half marathon and 2,500 in the 5k.

Since 2013, the event has attracted international runners from the United Kingdom, South Africa, Trinidad, Cayman, Barbados, Canada and the USA, including many from Florida.

Visitors have the chance, while competing with local runners, to win over 30 sectional prizes, including Top Male, Top Female, Age Group Prizes For Male and Female, and Fastest Mascot among others.

Kingston City Run starts with a Friday Night Carnival Party, a Lifestyle and Fitness Expo on Saturday and Race Day on Sunday, followed by an Awards Ceremony and after party.

Those from the US who would like to participate in the Kingston City Run next March should book air reservations early to arrive at Kingston’s Norman Manley International, which is served by several international airlines, including American Airlines, Caribbean Airlines, Jet Blue, West Jet, Air Canada Rouge, British Airways, Copa, Delta, Spirit and Insel Air.

Dancehall Artist Rygin King In Stable Condition After Being Shot

UWI Among the World’s 100 Best Universities