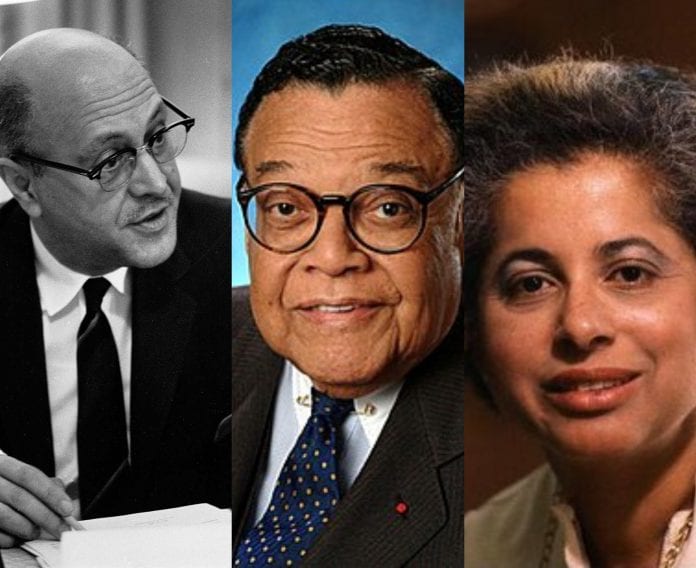 In selecting his Cabinet, President Joe Biden named two African Americans to the powerful position of Secretary of Defense—General Lloyd J. Austin III, the first Black man to hold this position, and Secretary of Housing and Urban Development Marcia Fudge.

He also named several African Americans and Caribbean Americans to other senior positions in his administration. And, of course, Vice President Kamala Harris is of African, Caribbean, and Asian origins.

Although there’s pride in the African-American community for these appointments, this is by no means the first. Since 1966, 24 African Americans have served as Cabinet secretaries in the administration of 10 U.S. presidents.

Robert C. Weaver became the first African American to hold a Cabinet position when he was appointed Secretary of Housing and Urban Development in 1966 by President Lyndon B. Johnson.

Colin Powell and Condoleezza Rice as secretaries of state were the highest-ranking African Americans in the United States presidential line of succession at that time. On January 20, 2021, Kamala Harris assumed that distinction on her inauguration as vice president.

The Department of Housing and Urban Development has had the most African-American Cabinet secretaries, with six. The Department of Transportation has had three. The departments of Education, Health and Human Services, Justice, State, and Veterans Affairs have each had two. The departments of Homeland Security, Agriculture, Commerce, Labor, Defense, and Energy has each had one.

President Bill Clinton appointed the most African Americans to the Cabinet during his tenure, with a total of seven.

The African American Cabinet Secretaries beginning from 1966 are:

Weaver, an economist, academic, and political administrator; served as the first Secretary of Housing and Urban Development (HUD.) from 1966 to 1968, when the department was established by President Lyndon Johnson. Weaver was the first African American to be appointed to a U.S. cabinet-level position.

Before being appointed to Johnson’s Cabinet, Weaver served in President John F. Kennedy’s administration. In addition, he had served in New York State government, and in high-level positions in New York City.

During the Franklin D. Roosevelt administration, he was one of 45 prominent African Americans appointed to positions and helped make up the Black Cabinet, an informal group of African-American public policy advisers. Weaver directed federal programs during the administration of the New Deal, at the same time completing his doctorate in economics in 1934 at Harvard University.

Robert Clifton Weaver was born on December 29, 1907, into a middle-class family in Washington, D.C. His parents encouraged him in his academic studies. His maternal grandfather was Dr. Robert Tanner Freeman, the first African American to graduate from Harvard in dentistry.

Weaver attended the M Street High School, now known as the Dunbar High School. The high school for Black students at a time of racial segregation had a national reputation for academic excellence. Weaver advanced to Harvard University, where he earned Bachelor of Science and Master of Arts degrees, and the Ph.D. in Economics in 1934.

Coleman, an attorney and judge, was the fourth Secretary of Transportation, from March 1975 to January 1977, and the second African American to serve in the United States Cabinet. He was appointed by President Gerald Ford. As an attorney, Coleman played a major role in significant civil rights cases.

As one of seven Black students at Germantown High School, Coleman experienced racial prejudice. A teacher once told praised his academic honors by telling him, “Someday, William, you will make a wonderful Chauffeur.” He cursed at her and was suspended.

When he attempted to join the school’s swim team, he was again suspended. Preferring to halt swimming altogether than being on a team with Coleman, the team disbanded only to reform soon after he graduated.

Harris served under President Jimmy Carter in two Cabinet positions—secretary of Housing and Urban Development, and secretary of Health, Education, and Welfare (renamed the secretary of Health and Human Services during her tenure). She was the first African-American woman to serve in the United States Cabinet, and the first to enter the line of succession to the presidency.

Harris previously served as United States Ambassador to Luxembourg under President Lyndon B. Johnson, and was also the first African-American woman to represent the United States as an ambassador.

In 1943, she participated in one of the nation’s first lunch counter sit-ins. She did postgraduate work in industrial relations at the University of Chicago from 1946 to 1949 and at American University in 1949.

Working as the assistant director of the American Council on Human Rights, she met William Beasley Harris, a member of Howard University’s law faculty, who she married in 1955. She began pursuing a career in education, but saw limited opportunity because of segregation. On her husband’s encouragement, she attended the George Washington University National Law Center, graduating with the JD in 1960, ranking first from a class of ninety-four students.

Harris unsuccessfully ran for Mayor of Washington, D.C. in 1982, losing the primary election to incumbent mayor Marion Barry. That year, she was appointed a full-time professor at the George Washington National Law Center.