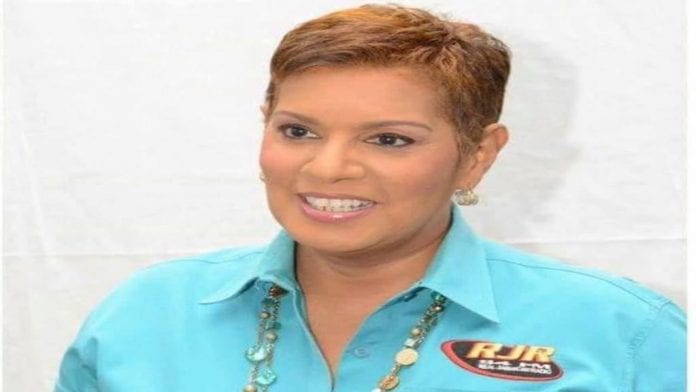 Veteran Broadcaster, known for having one of the most well-known voices in Jamaican Media, Dorraine Samuels passed away on March 26, 2019, at the age of 59.
Just earlier this month, concerns about her health were raised on social media and it was later discovered that she was battling cancer. It was reported by local media that she underwent surgery in March and was in the process of recovery.
Dorraine Samuels was a former longstanding employee with the RJR/Gleaner Communications Group for nearly forty years, having just retired in January 2019. For many Jamaicans worldwide, she had become a familiar and one of the most loved personalities in Jamaican media.
She entered the field of broadcasting in January 1981 by a stroke of luck, after her talent as a speaker was spotted while visiting Radio Jamaica as a finalist in the Miss Jamaica World pageant a few months earlier.
Many Jamaicans later came to know and love Samuels from her unforgettable partnership with Alan Magnus on Radio Jamaica’s (RJR) morning programme Good Morning Jamaica for two decades, as well as being co-anchor for Television Jamaica’s (TVJ) Prime Time News for 14 years.
Many citizens, fellow media personnel, former coworkers and politicians have taken to social media to express their shock and regret at the passing of Samuels.
Prime Minister of Jamaica, Andrew Holness, making a statement, said “Dorraine inspired the nation as she shared remarkable human interest stories and presented the history of Jamaica in living colour. She chronicled the evolution of modern Jamaica with poise and confidence on the nightly news.”
Samuels will forever be in the hearts of all Jamaicans who grew up hearing her voice every morning and later seeing her on local television. She was a true Jamaican nation-builder and will be missed.
Advertisement