Born in poverty in Port‐au‐Prince on April 14, 1907 to Duval Duvalier, a school teacher, and Uritia Abraham, a bakery worker. Duvalier graduated from the University Of Haiti School Of Medicine, in 1934.  Following graduation, he worked as a travelling doctor in rural Haiti where he won the respect of the suffering and superstitious, as a doctor who could “work miracles.”  Garnering the support of regional voodoo houngans (witch doctors), he published the book, “Gradual Evolution of Voodoo” in 1944.

In 1946 Duvalier served as Director General of the national Public Health Service and in 1948, having become interested in politics, he was made Secretary of Labor, however, being anti the current Magloire regime, Duvalier was forced into exile.  When General Magloire was deposed in 1956, Duvalier returned from exile and returned to politics.

After having won by an overwhelming majority, in the 1957 elections, Duvalier set to work recruiting the notorious Tontons Macoutes who were responsible for carrying out orders to rid the country of and/or detain any enemies, to silence the media by bombing newspapers and jailing editors and publishers of local periodicals.

Duvalier suffered from trust issues, and frequently “retired” generals who he felt may potentially lead coups against him.  In 1959, following a coup attempt by Haitian exiles, Papa Doc suffered a serious heart attack that almost killed him.  Following his recovery, Duvalier jailed his stand-in and went on to rig elections in his favor in 1961. 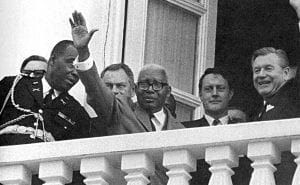 During his rule, the notorious dictator was so consumed with his own power and a need to be seen as the loved leader of Haiti, that he ordered huge likenesses of himself plastered on walls in the capital city, Port‐au Prince, and from time to time required “spontaneous” demonstrations of affection, busing in thousands of the largely illiterate and desperately poor to the capital, to scream adoringly, “Du‐val‐yeah, Du‐val‐yeah!” and “Viva Papa Doc!”  The dictator also known to have indoctrinated Haitian children with a political catechism that included his own parody of The Lord’s Prayer:

“Our Doc, who art in the National Palace for life, Hallowed be Thy name by present and future generations. Thy will be done at Port‐au‐Prince and in the provinces. Give us this day our new Haiti and never forgive the trespasses of the anti-patriots who spit every day on our country; let them succumb to temptation, and under the weight of their venom, deliver them not from any evil . . .”

Duvalier remained in power until he died in 1971, succeeded by his son, Jean‑Claude Duvalier. 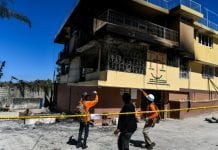 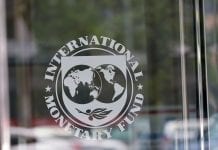