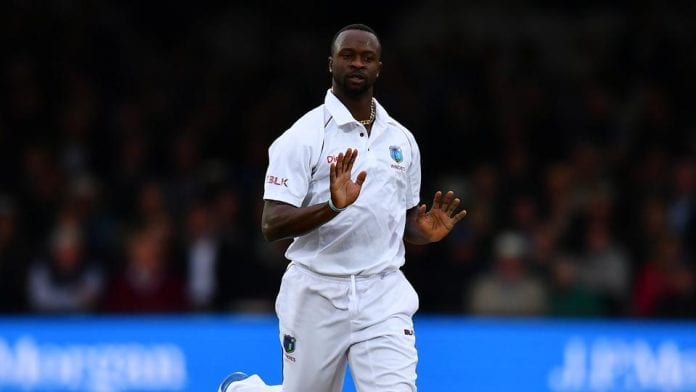 LONDON, CMC – West Indies Seamer Kemar Roach has moved into the top 10 of the ICC bowling rankings despite West Indies’ heavy drubbing on Sunday in the opening Test against India.

The 31-year-old Barbadian bowled outstandingly to end the contest at the Vivian Richards Cricket Ground in Antigua with five wickets, and was rewarded with a leap of three places to eighth.

Roach was magnificent in the first innings, taking four wickets and took only one in India’s second innings of 343 for seven declared, despite another superb exhibition of seam bowling.

Part-time off-spinner Roston Chase, who finished with a six-wicket match haul after sending down 54 overs, has risen from 45th to 38th.

Captain Jason Holder has slipped to 11th while fellow pacer Shannon Gabriel is down to 16th, after picking up two and four wickets respectively in the Antigua Test.

England’s Barbadian fast-bowling sensation, Jofra Archer has meanwhile rocketed 40 places up the rankings to 43rd, following his eight-wicket haul in the third Ashes Test at Leeds.

The 24-year-old claimed his first-ever five-wicket haul in only his second Test which he blew Australia away with a spell of six for 45 in the first innings.

In the batting rankings, all-rounder Holder has moved three places up to 34th to be the highest-ranked West Indies player. The right-hander, who remains the leading all-rounder, notched scores of 39 and eight in Antigua as his side produced two hugely disappointing performances with the bat.

Chase lies 39th while usually prolific opener Kraigg Brathwaite, who was 16th this time last year, has crashed to 41st following a poor run of form that has seen him average 13 from his last eight Tests.

Wicketkeeper Shane Dowrich (48), who missed the last Test with injury, and left-hander Shimron Hetmyer (49) are the only other two West Indies batsmen in the top 50.

West Indies lost the opening Test by 318 runs inside four days after collapsing for 100 in their second innings, in pursuit of 419 for victory.

They face India in the second Test starting Friday at Sabina Park in Kingson.