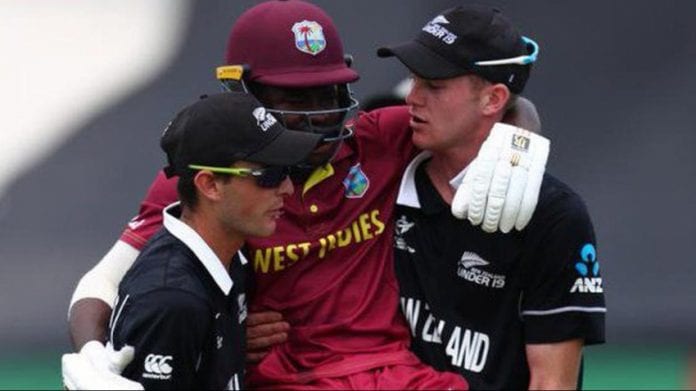 KINGSTON, Jamaica – There have been two humiliating results from sporting events over the past week, which have evoked contrasting emotions.

Firstly, West Indies Under-19 cricket team suffered a heart-breaking two-wicket loss to New Zealand in the quarter-final on the ICC World Cup in South Africa.

The West Indies posted 238 all out and appeared to be coasting to victory when they reduced New Zealand to 153-8 in the 35th over, but tail-enders Kristian Clarke with an unbeaten 46, and Joey Field, unbeaten on 38, engineered and record 86-run ninth-wicket partnership to snatch victory from the jaws of defeat with two balls to spare.

The West Indies’ Jamaican Kirk McKenzie had blasted 99 but was forced to retire hurt with what appeared to be severe cramps in the 42nd over, only to be dismissed with the first ball when he resumed in the 48th over.

At one stage the West Indies were 183 for three in the 36th over but lost their last seven wickets for just 55 runs in an unbelievable collapse.

“The team was looking at 280, 290 and even possibly more if we really went well in that last 10 or 12 overs but we lost three very quick wickets to very, very soft, poor shots and lost all momentum.

“We were fortunate to get up to get up to [238] in the end so we were at least 40 runs short of what we should have gotten ourselves to.”

He noted that McKenzie being forced off at that time was a huge blow to the momentum of the innings.

“When you have a man that’s in and well set, you’re hoping that he goes on and really bats through the innings but that wasn’t the case,” the Englishman recalled.

“He was struck down at a crucial moment because that was around the time we lost a couple of wickets. He played a fantastic innings, something he’s been threatening for some time without really making a big score but I was delighted to see Kirk really demonstrate his quality.”

West then said the bowlers executed well to reduce New Zealand to 67 for four in the 16th over and despite a half-century, fifth-wicket partnership, left-arm spinner Ashmead Nedd put the Caribbean side in command by snatching three quick wickets.

But somehow the regional side found a way to lose the contest and with it a chance to register a second triumph at the tournament.

West’s explanation is that the “death bowlers” failed to execute in the latter stages of the contest.

But this is where I take a divergent view from the coach.

From my standpoint, the so-called “death bowlers” served up fashionable slower balls, wide balls and other deliveries which were welcomed by the tail-enders.

At the end of Nedd’s spell, the time was right for Captain Kimani Melius to turn to the impressive fast bowler Jayden Seales to clean up the tail. The 18-year-old had been the talk of the tournament delivering balls close to 90 miles per hour and clearly disturbing all the batsmen with hostility, with skills and a great deal of control.

But somehow he was never given the ball after had completed 21 runs, including a maiden, from six overs. Generally, he was the West Indies’ best bowler at the tournament, and on the day he was the best of the fast bowlers and was the only one who had bowled a maiden over.

The snubbing of Seales is yet to be explained if it can be.

Though the West Indies should have put more runs on the board, and though they dropped a few critical catches, not having Seales bowl his full allotment of 10 overs was a gigantic mistake, and that’s where, I believe, the West Indies lost it.

Then on Saturday night, the Reggae Girlz were humiliated 9-0 by Canada in their CONCACAF Olympic Qualifying Group B game in Texas.

To say the Reggae Girlz have had a bumpy and rugged road to tournaments since their historic trip to the FIFA World Cup in France last summer, would be an understatement.

But truth be told, they were always fighting an uphill battle to gain one of the two spots to the Tokyo Olympic Games this summer.

They might have lost Head Coach Hue Menzies, and his number one assistant Lorne Donaldson, along the way, but they are not at the same level of preparedness and cohesion as they did leading up to the World Cup qualifying campaign.

For those who might have forgotten, their performance at the Pan Am Games in Peru last year was nothing to write home about. They lost 0-2 to Mexico, 1-3 to Paraguay, 0-2 to Colombia and edged Peru 1-0.

Canada is a top-10 team on the FIFA world ranking, while Jamaica is at 51st. My experience in sports in general and football, in particular, is that on any given day just about any result is possible. One needs to look no further than the 2014 FIFA Men’s World Cup semi-finals when eventual champions Germany embarrassed home team Brazil 7-1.

I suspect what made this loss so much harder to accept was because fans thought that after qualifying for the World Cup Finals, it was now a natural progression to qualify for the Olympic Games.

But one should always remember that there’s no Devine right for Jamaica or any other nation to qualify for any tournament.

The Netherlands finished third at the 2014 FIFA World Cup Finals but failed to qualify for the next Euro Championship, and history is replete with devastation failures immediately after glowing successes. That’s the nature of sport and we had better get used to it.