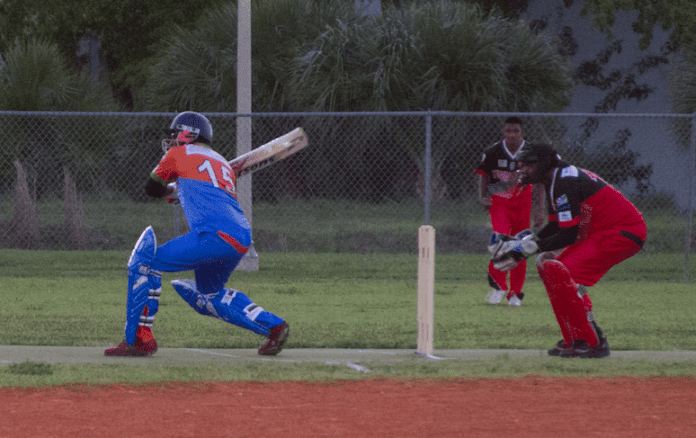 Team Trinidad and Tobago enjoyed a confident victory against India by 51 runs in the Lauderhill T20 International Cricket tournament last weekend. Winning the toss and electing to bat, Trinidad and Tobago piled up 117 for 4 in the allotted 20 overs after a solid 61 runs opening partnership between National USA player Timothy Surajbally (33) and Neil Mungal (21).

Tariq Hosein continued the onslaught against the Indian bowlers, smashing 42 not out from 26 deliveries, featuring one four and three sixes, while Ken Singh blasted a cameo 38 and Zeko Burgess 19. Bowling for India, Khajapeer Mulla bagged 2 for 33, Prashanth Shetty 1 for 18 and Srinivas Nandina 1 for 34. In reply, the Indian batsmen were restricted to 126, with Sreeram Nimmala the only batsman showing any resistance with 32 runs, including one four and three sixes. Other contributions came from Khajapeer Mulla 17, Renjith Chandran 15 not out, Justin Holder 14 and Sarosh Siddiqui 13. Bowling for Trinidad and Tobago, Adam Khan grabbed 2 for 12 and Parvish Deonarinesingh 2 for 15, while veteran all-rounder Ken Singh further sank the Indian batsmen with 2 for 22 and Zeko Burgess 2 for 22.

For defending champions Jamaica registered their first victory in a nail-biting thriller against Pakistan at the Lauderhill Sports Park in game 11 of the 2016 City of Lauderhill T20 Cricket Tournament. Electing to take first strike after winning the toss, Jamaica got off to miserable start with four runs from one wicket, but a partnership between the reliable Ken Wright and Nicholas Mitto renewed hope. Wright caught fire to the delight of spectators, slamming 59, including four fours and six sixes, while Mitto chipped in with 35.

Bowling for Pakistan, Zeshawn Qureshi sniffed 3 for 26, Matasfa Dewan 2 for 18, Syed Hassan 1 for 19 and Rajesh Shrema 1 for 42. Chasing a victory target of 162, the Pakistani top three batsmen faltered against the Jamaican’s opening attack of Herlando Johnson and Elvis Watson. Reeling at 3 for 3, Samish Sadiq and Y. Tajpar shared 130 runs to rebuild the Pakistani’ innings. Sadiq blasted 69, including six fours and three sixes, while Tajpar smashed 56, highlighted by five fours. Pakistan needed 10 runs from the last over to secure a place into the semi-finals, but Keyoine Gayle restricted the Pakistani batsmen to 7 runs and handed Jamaica its first victory of the tournament. Bowling for Jamaica, Johnson snared 3 for 31, Elvis Watson 2 for 25, Glen Anglin 1 for 14 and Gayle 1 for 32.