Trinidad and Tobago’s National shot-putter Cleopatra Borel will decide by July whether she will compete in her fifth and final Olympics, now that the 2020 Olympics has been postponed until next year because of the COVID-19 pandemic.

Borel said while she wanted to compete, it was still too early to make a final decision. “Right now, everything is just up in the air. I don’t think anyone is certain in terms of what will happen for next year, so it’s a kind of wait and see situation,” she said on a radio interview in Trinidad.

The spread of COVID-19, which has affected over 3 million people worldwide, forced the International Olympic Association (IOC) to postpone the Summer Olympics in Tokyo, Japan, originally scheduled for July 24-August 9 this year to July 23-August 8, 2021.

Borel, who will be 42 by then, participated in the last four Olympics. At her most recent outing, Brazil in 2016, she indicated she was considering retirement but decided to compete in Tokyo 2020.

Questioned by ISports host Andre Baptiste whether she would still compete given the additional year-long wait, Borel said she was “just waiting to see what happens.”

“It’s a very difficult decision to make at this moment. I’ll like to keep going, I will like to compete, but we are in unprecedented times. We don’t know how things are going to roll back out, we don’t how things are going to go. I am going to give it a go, but there’s no certainty right now,” responded Borel, who called the postponement of the Olympics a “huge disappointment.”

Pressed by Baptiste what would be the deciding factor for her, she indicated that she would decide a year before the scheduled start of the Games.
“We have to prepare. I would say it takes about 12 months to get ready, so if by July this year, or later in this year I’m looking at things and it looks as if the time won’t be there and the resources that we need to prepare won’t be there, I’m going to make the choice by the middle of this year, definitely,” she said.

Regardless of her decision, Borel said she intends to remain involved in sport, track and field in particular, even if not as a competitor. She also confirmed her interest in politics.

It had been reported earlier this month that Borel had expressed interest in representing the Barataria/San Juan consistency for the ruling People’s National Movement (PNM). 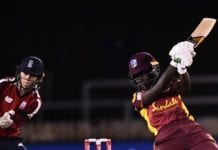