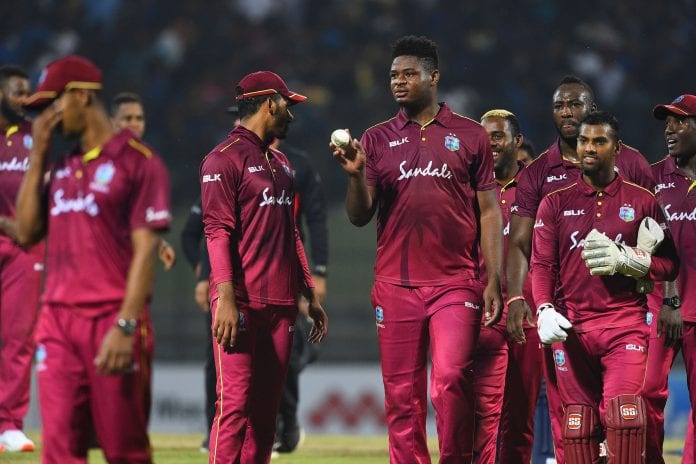 Managing to shake off any lingering lethargy from the 3-0 whitewash in the preceding one-day series, the Caribbean rallied to 196 for four off their 20 overs after opting to bat first at the Pallekele International Cricket Stadium, with Simmons top-scoring with 67 not out off 51 balls.

All-rounder Andre Russell, in his first T20 International in nearly two years, clobbered a feisty 14-ball 35 and Pollard matched him with an equally brutal 15-ball 34 while opener Brandon King chipped in with 33 off 25 deliveries.

West Indies were 90 for one at the half-way mark but the assault from Russell and Pollard saw the visitors gather 106 from the last 10 overs.

In reply, Sri Lanka were rocked by Thomas’s opening burst, the right-armer taking the first five wickets to fall to reduce the hosts to 56 for five at the end of the sixth over.

Opener Kusal Perera engineered a recovery with a high class 66 from 38 balls while Wanindu Hasaranga belted 44 from 34 balls but Man-of-the-Match Thomas (5-28) had already done the damage and Sri Lanka were dismissed for 171 at the start of the final over.

Desperate to shake off the disappointment of the ODI series, the reigning world champions were handed an excellent start by Simmons and King as they pair posted 74 off 50 balls for the first wicket.

Simmons counted seven fours and two sixes while King struck five fours and a six before holing to long-on in the ninth over off left-arm spinner Lakshan Sandakan.

The incoming batsmen then all batted around Simmons, Nicholas Pooran (14) helping to add 32 for the second wicket and Russell smashing two fours and fours sixes in adding a further 39 for the third wicket.

When Russell was beautifully yorked by veteran speedster and captain Lasith Malinga in the 16th over, Pollard arrived to sustain the intensity, striking three fours and a couple of sixes in a 45-run, fourth-wicket stand with Simmons.

Thomas then wasted little time putting the Windies in command as he turned the game on its head in the second over when he knocked over Avishka Fernando (7), Shehan Jayasuriya (0) and Kusal Mendis (0) in the space of four balls.

Fernando was taken on the second attempt by wicketkeeper Pooran off a short, quick delivery, Jayasuriya holed out to third man off the next ball and with the final delivery of the over, Mendis gloved another short one behind.

Tottering on 17 from three, there was some respite courtesy of a 24-run stand between Kusal and Angelo Mathews (10), allowing Sri Lanka to steady themselves.

However, Thomas shook up Mathews with a blow to the head and then removed him three balls later in the fourth over to a brilliant running catch in the deep by Russell. And when the 23-year-old, who escaped serious injury in a vehicular accident just two weeks ago, bowled Shaaka leg-stump in his next over, Sri Lanka’s innings was in strife. 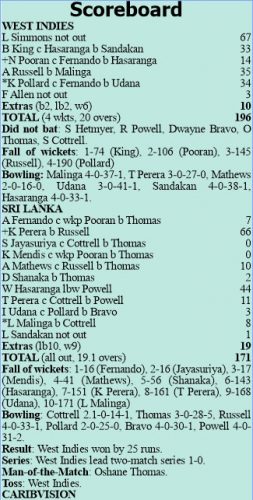 Kusal capitalised on Thomas’s exit from the attack, counting half-dozen fours and three sixes in an 87-run, sixth-wicket stand with Hasaranga who struck four fours in his knock.

The pair were hauling Sri Lanka back into the contest when Hasaranga perished in the 16th over, lbw to medium-pacer Rovman Powell (2-31), and the challenge quickly fizzled out as the last five wickets went down for 28 runs in the space of 22 deliveries.