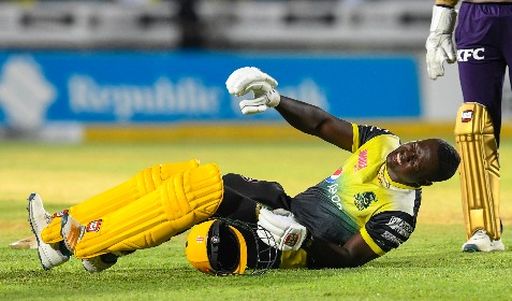 BRIDGETOWN, Barbados, CMC – Jamaica Tallawahs will have to do without key all-rounder Rovman Powell for the rest of the Caribbean Premier League after he was ruled out through injury.

The big-hitting right-hander, who also bowls medium pace, limped out of last Friday’s contest against two-time reigning champions Trinbago Knight Riders, after hitting a six and then collapsing while holding his rib cage.

He was subsequently diagnosed with an abdominal strain.

Powell has been replaced by former Barbados and West Indies all-rounder, Dwayne Smith, who made a first-ball ‘duck’ on debut in Sunday’s maiden win over Barbados Tridents at Sabina Park.

Smith is one of three players called up by Tallawahs with England seamer Jade Dernbach replacing Kennar Lewis and Jermaine Blackwood covering for star all-rounder Andre Russell who was struck by a short ball from Hardus Viljoen in the fixture against St Lucia Zouks last Thursday.

Russell was cleared of serious injury but has not played since.

Tallawahs have endured a disastrous start to their campaign, losing their first four games before breaking their slump with a four-wicket win over Tridents on Sunday.

Meanwhile, both Tridents and Zouks have also been forced to make changes to their lineups. South African Colin Ingram has joined Zouks, replacing Sri Lankan Thisara Perera who has been summoned by his national team while Tridents have brought in Australian all-rounder Dan Christian for the unavailable Asif Ali.