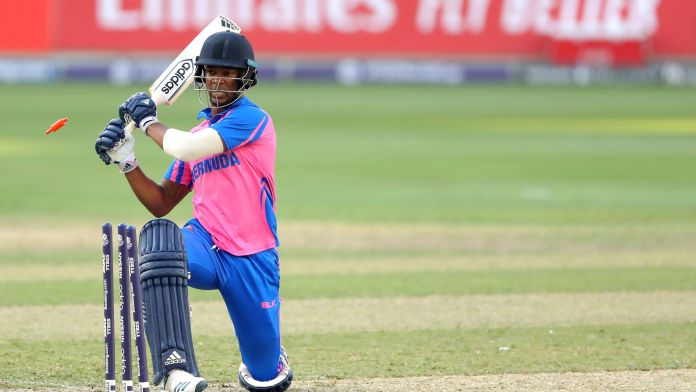 All-rounder Delray Rawlins has been hailed as a “superstar” by Sussex Sharks captain Luke Wright after the Bermudian’s blistering unbeaten half-century and two wickets helped his side canter to an eight-wicket Vitality Blast victory over previously unbeaten South Group leaders Kent Spitfires.

Rawlins, a 22-year-old left-hander, hammered four sixes and six fours in an eye-catching 33-ball 62 not out at number three that saw the Sharks seal a fourth qualifying win with 26 balls to spare.

He had earlier taken two for 25 in three overs of left-arm spin that helped restrict the Spitfires to 141 for eight in their 20 overs.

“We’ve been asking Delray to have a better tempo about his batting. He sometimes goes at it so hard that he tends to give his wicket away,” said Wright.

“It was so pleasing to see him bat the way he did here. He looked like a superstar out there and we know he can go on and be the international player he aspires to be.”

Slow bowler Rawlins, who came on as third change, struck a vital blow at 62 for one when he bowled Kent captain Daniel Bell-Drummond for 29 in the eighth over when he missed an attempted slog sweep.

Rawlins followed up by having Heino Kuhn caught on the run at backward square leg by Calum MacLeod for 22 at the end of the 12th over as the hosts slipped to 104 for four, eventually closing on 141 for eight.

Wright, who made 45 at the top of the Sussex innings, said: “After the great start Kent had I thought that maybe they believed they needed a score of about 180 to 200, but it really wasn’t that type of wicket today.

“Getting those wickets in the middle overs helped us to drag it back and it was great for us that Delray got a couple of wickets, too.

“I’ve been trying to give him more of a bowl in this and he helped us to strangle them run-rate-wise in the middle overs.”