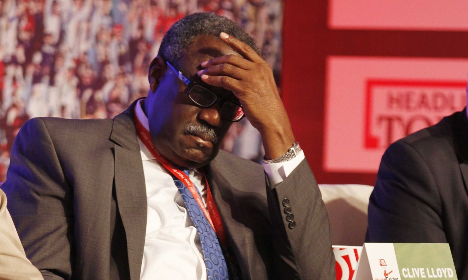 West Indies are staring at an early exit from the tournament in the United Arab Emirates after losing their opening two games, going down to England by six wickets last Saturday and then crashing to an eight-wicket defeat to South Africa on Tuesday.

The loss to England saw them bundled out for 55 – their lowest ever Twenty20 World Cup total and second-lowest in T20 Internationals.

“We had a wonderful start [against South Africa] and we didn’t promote people in the proper order. You would expect the captain (Kieron Pollard) to come up and when you’re going at nine [runs] an over.

“You send (Nicholas) Pooran who has not been playing well and you have (Shimton) Hetmyer who is batting quite well and has made some very good scores, so their batting order seems to be all over the place.”

West Indies looked to be turning their fortunes around when they raced to 73 without loss against South Africa but collapsed at the back end to slump to an inadequate 143 for eight off their 20 overs.

Opener Evin Lewis top-scored with 56 from 35 balls but Pollard was the only other batsman to pass 20 with 26 as wickets fell steadily.

Sir Clive, a former chairman of selectors and team manager, said with their success in the powerplay, West Indies should have mounted a more competitive total but were let down by a muddled approach to their batting in the last ten overs.

“In the powerplay, if you get to 50 and you haven’t lost a lot of wickets, you’ve done very well,” Sir Clive told Starcom Radio’s Mason and Guest cricket talk show in Barbados.

“You are looking at a large score – at one stage the predictor said they would make 174 but somewhere along the line we felt that this game was about hitting sixes. We were getting caught on the boundary. This is a big, big ground.

“If I’m 58, I’m looking to be 80 or 90. I’m looking to get some runs if I’m an opener and take the game away from the opposition. We were 30 runs short [against South Africa]. We bat until number eight and we still can’t get there.”

The two defeats have left West Indies with only a longshot of finishing in the top two of Group 1 and qualifying for the semi-finals.

And their remaining games will be difficult propositions as they take on Bangladesh on Friday, Sri Lanka on November 4 and Australia in their final group stage contest two days later.

Sir Clive, credited with molding West Indies into the dominant force of the late 1970s and 1980s, said a more calculated game plan was necessary if the Caribbean side were to change course.

“Our planning has been bad and I think somebody has got to take hold of the situation. It’s not all slogging, it’s about working things out,” he stressed.

“That’s why one-day cricket is such a wonderful game to play because you have to do everything in one day.

“We have all the bowling we can think of, we have batting until eight or nine and we get bowled out for 55 on a pitch that is probably one of the best pitches in the UAE, and some of our guys have played on those pitches.